Drain pipes on the bridge across the Wiehltal valley 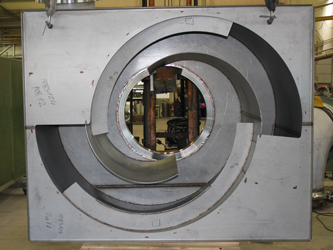 When you drive along the A4 motorway between Cologne and Olpe, you currently have to reckon with speed limits due to construction measures. The motorway bridge across the Wiehltal valley in North Rhine-Westphalia is undergoing comprehensive renovation work. And BUTTING is involved in this by supplying a currently unique drain pipe to reduce noise pollution for residents that is caused by draining rain water.

The bridge was already at the centre of public interest a few years ago: A lorry loaded with 32,000 litres of petrol and diesel fell off the bridge and went up in flames, and the driver died in the incident. The very busy motorway bridge suffered serious damage from the blaze. The renovation of the top part of the bridge is said to have cost over EUR 30 million. The village of Weiershagen, which is situated under the bridge, narrowly escaped a disaster back then.

Today, the bridge is back in the public eye. It has been undergoing new renovation work by “Landesbetrieb Straßenbau”, a state enterprise and provider of roads development and maintenance services, since 2010. Drainage to a new rainwater overflow basin under the bridge is created as part of this construction work. This measure involves the introduction and testing of a new system to reduce noise pollution for residents caused by drainage.

Together with a university for applied sciences and our customer Höllko Raimund Höllein Carolinenhütte from Kallmünz, we have developed a concept for reducing noise emissions caused by draining water from the bridge. This is necessary since the 705 m long bridge passes directly above the village of Weiershagen. At present, the entire rain water shoots down the 60 m long pipes next to the bridge pier. In heavy rain, in particular, the deluge of water causes a great deal of noise. In future, rain water will be made to rotate through a specially constructed chamber at the top of the feeder pipe. This causes the water to flow in a circular motion along the outer pipe wall like in a vortex. In addition, the concrete and plastic pipes will be replaced with stainless steel pipes.

BUTTING has been awarded the contract to produce and deliver the chamber and the prefabricated pipe components with the metal brackets. Here, the pipes must be produced with a total length of almost 60 m for the downpipe with an internal diameter of DN 800. Thanks to the manufacturing possibilities in Knesebeck, BUTTING produced the pipes with just one longitudinal seam from wide steel plates. The end products were subject to the highest requirements: Heavily restricted tolerances for the internal diameter and the ovality and straightness were specified; the pipes which were ground inside were not permitted to display any edge misalignments. In addition, the length tolerance for the pipes amounted to a maximum of 1 mm and the straightness of the theoretical pipe axis (known as squareness) was ≤ 0.1%. To meet these squareness requirements, the pipes were mechanically processed at BUTTING. The strict requirements had to be checked several times during the production process and recorded in dimension reports. In addition to the internal quality control process, the customer conducted acceptance testing and the building authority responsible carried out an inspection.

BUTTING was able to deliver the first piping components to the customer’s satisfaction as early as in November of last year. This means that the project to repair the drain pipes at the bridge across the Wiehltal valley can be continued in a timely manner in the interest of the residents.