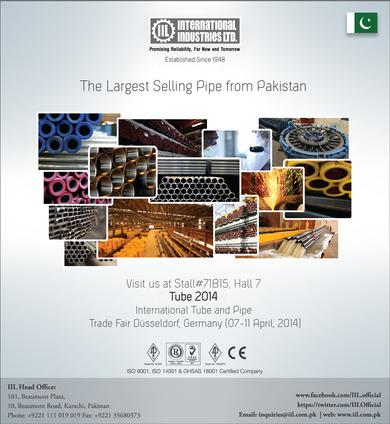 International Industries Limited, Pakistan’s premier pipe manufacturer was established in Pakistan in 1948 as Sultan Chinoy & Company, within a year of the country’s independence. The next year, in 1949, it was incorporated as International Industries Limited. After 65 years of consistent performance the prestigious pipe manufacturer’s products are featured in all major developmental work undertaken in the country – be it supplying gas to the most far flung villages in the Northern Mountains of Pakistan or for exceptional architectural projects in Pakistan’s Southern metropolis.

Since its inception, IIL has been committed to expanding its product line, and introducing new technologies in pipe making to the industry of Pakistan. A major step in IIL’s journey of innovation came in 1965 when the company launched its line of high quality Electric Resistance Welded Steel Pipe and then IIL launched Galvanized Pipe in 1983. As a Public Limited company, IIL continued to expand its facilities and set up the country's first Cold Rolling Mill in the private sector in 1990. In 2005, the company achieved certification to API Q1 & 5L (2000).
In 2006, IIL took a bold step outside its traditional stronghold of steel pipes by manufacturing of Polyethylene Line Pipes. Additionally, the mill is also has an independent power source in the form of co-generation Power Plants. In the last 10 IIL has added galvanizing plants, plastic extruders, slitters and multiple tube mills to its production facilities.

The result of IIL’s pledge to quality while increasing its capacity has resulted in exponential growth in revenue. Today the company’s gross sales cross 200,000 tons and having employees close to 1600 people. The company is ISO 9001, OHSAS –ISO 18001 and ISO 14001 certified aside from having CE Mark Certification. The company has also won Annual Environment Excellence Award in 2011 by National Forum for Environment and Health (NFEH).
The organization is recognized as one of the best managed companies in Pakistan by Management Association of Pakistan. Today the company is among the top 25 listed on the Karachi Stock Exchange. A testament to the company’s financial strength is the fact that it owns 56% share capital of its registered subsidiary International Steel Limited, the largest manufacturers of Cold Roll Steel coils and Galvanized Steel Coils in Pakistan. In 2008, upon completing 60 years in operation, IIL was awarded international credit rating by Pakistan Credit Rating Agency.
1995 was a landmark year for IIL. After conquering the domestic tubes market, IIL entered the international market with export of galvanized pipe. Since then, the company has won many accolades for its export performance in mechanical engineering / non-traditional exports category including “Best Export” trophy awarded by the Pakistan Chamber of Commerce and Industry consecutively for the past 13 years.

It is with the objective of introducing IIL to the mover and shakers in the global tube industry that the company is participating in Tube Dusseldorf 2014. The company’s representatives will be available at the exhibition from April 07-11 2014 at Stand 71B15, Hall 7.1. Please join them at Tube Dusseldorf to discuss possibilities for a mutually profitable business relationship!