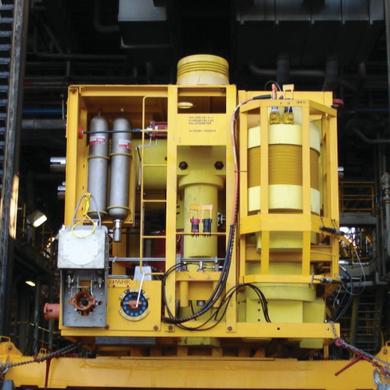 The subsea systems supplier used to plan the routes for the hydraulic tubing runs that interconnect the valves and other component parts of the subsea trees, and then fabricate the custom tubular part shapes, as the trees were being built. This process slowed down the build cycle, and limited the total number of trees that could be assembled in the company's sophisticated system building cells.

FMC Technologies decided to investigate the use of 3D modelling of tubing, which would allow the tubing system required for subsea tree orders to be designed and bent in advance of system building and then delivered to the manufacturing cells ready for immediate assembly. As part of this process re-engineering initiative, FMC Technologies also purchased a Unison tube bending machine with servomotor-based actuation, to provide a complete CADCAM solution.

The Unison machine's advanced all-electric architecture was preferred over the more traditional hydraulically-powered bending approach because of the greater precision and inherent repeatability that it supports, which allows tubular part shapes to be bent right-first-time - avoiding scrap. This is ideal for the subsea tree production environment which demands lots of tubing parts with unique shapes - which FMC Technologies fabricates as a single batch for each tree project. The tubular materials being bent are often very expensive alloys as well such as Super-Duplex and Inconel 625, so avoidance of scrap is a major saving.

FMC Technologies selected Unison as its bending machine partner - after talking to numerous machine manufacturers - primarily because of the company's willingness to engineer a bending process to meet the company's precise needs. Unison worked closely with FMC Technologies on developing and streamlining the tubular part manufacturing process including automating the transfer of data from its CAD system and simplifying the subsequent part shape programming process. Unison also supplies benders complete with application-specific tube washing machines, which ensure that tubular parts are provided to FMC Technologies’ assembly bays clean and ready to weld - to minimise any welding failures.

Using the new process, the time required for tubing assembly in FMC Technologies’ cells has fallen by around two thirds, with the additional advantage of introducing a standardized process with a consistent quality that negates possible human error or fatigue.

"The new tube bending process is a win-win solution for our business, as it provides us with a highly consistent and repeatable manufacturing process, and is considerably faster than before - boosting FMC Technologies’ productivity and shortening our delivery times to customers," said Richie Barker, a Manufacturing Specialist (Global Manufacturing) at FMC Technologies.

Unison's Steve Haddrell adds: “We have been very proud to be selected for this project as the aims have been so far-reaching - our machines are now an integral element of a design-to-manufacturing strategy that is helping one of the world's best-known oil and gas companies to maintain its leading position in a highly competitive market."

FMC Technologies has now rolled this production methodology out to other FMC sites around the world - and produces tubing for subsea trees using Unison machines at production locations in Angola, Brazil, Norway, Scotland, Singapore and the USA.