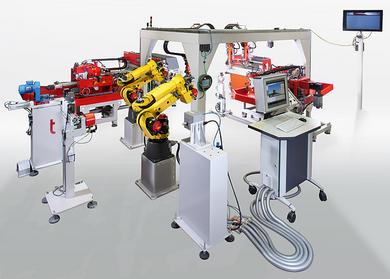 Go to work in the morning and switch on the TV first thing: It sounds like a dream, but transfluid Maschinenbau GmbH makes it the heart of an intelligent tube machining system with its camera-controlled, fully electric manufacturing cell.

In fact, the large screen installed above the system does not broadcast the latest news into the workshop – but the program offers valuable information nevertheless. In continuous rotation it displays energy consumption, the CPK value, the number of tubes that have been processed so far and the component being produced.

One side of the tube is always processed prior to the bending procedure with a combination tube forming machine, while the second end is subsequently cut chip-free after the bending procedure and is then also formed. If necessary, the robot then holds the processed tube in a de-burring mechanism. "Both ends can be visually controlled with the help of the camera", says Stefanie Flaeper, managing director at transfluid, as she explains the features of the system. "Alternately, the robot holds the tube in a labelling unit in which the tube can then be marked in all positions – and without the need for any type of clamping device."

In addition, a forming machine with a rotary indexing table can be used to connect two tubes together with a flange. For the manufacturing process, this ensures high output with 100 per cent documented quality in addition to the highest level of security – and it also provides informative "entertainment" with a large screen.

transfluid is sought after worldwide as a partner for manufacturing tube bending machines and tube processing machines. Since 1988 transfluid has been further developing its technologies for tube machining, so that it can provide customer-oriented, tailor-made solutions – for plant and machine construction, the automotive and energy industries, shipbuilding and medical device manufacturing. As a world-renowned brand, the company from Germany is present in Europe and with its subsidiaries in Asia.