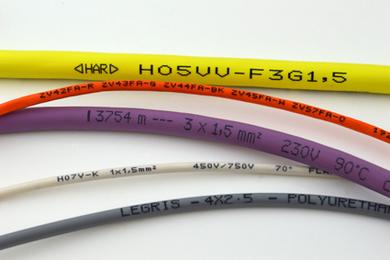 At Wire trade show, German marking specialist Paul LEIBINGER will present its latest inkjet printer, which is over 30% faster than previous LEIBINGER printers. The JET3up RAPID allows cables to be marked immediately after extrusion at a speed of up to 1000 m/min.

With the JET3up RAPID, LEIBINGER once again demonstrates its capacity for innovation and German-engineered quality. The JET3up RAPID is the only inkjet printer in the world that can mark products at up to 1000 m/min (or 60 km/h) and is also fitted with an automatic nozzle seal. The nozzle seal “Sealtronic” prevents ink from drying even during long pauses in production.

This exclusive development allows LEIBINGER to meet the increasingly stringent requirements of cable marking. In parallel with ever faster extrusion lines, it also has to be possible for the subsequent marking to take place at very high speeds. The many innovations of the JET3up RAPID make this possible. For example, the new printer has a much higher drop frequency. The JET3up RAPID also has a printhead designed especially for high speeds. The imprint, e.g. a LOT number or the manufacturer's name, can therefore be added very quickly to the product.

Like all other LEIBINGER small-character inkjet printers, the JET3up RAPID also comes with more than 800 functions integrated as standard. Visitors to Wire will therefore get an advance preview of an exclusive world first. The JET3up RAPID will not be officially launched until the middle of the year.

What's more, the LEIBINGER range now includes inks especially for marking cables and pipes. A new black adhesive ink is particularly well suited to hard-to-print pipe and cable materials. It shows extremely good adhesion and abrasion resistance on PE (polyethylene), PP (polypropylene), and OPP (oriented polypropylene). A new silver gray ink can be used for both light and dark surfaces. So just one printer is needed when marking cables or pipes of different colors on one extrusion line. The pigmented ink appears almost white on black surfaces and gray on white ones. LEIBINGER now also supplies a heat-curing, white-pigmented ink especially for dark PA (polyamide) surfaces. When producing PA pipes, the marking is applied immediately after extrusion and then dried and cured automatically as the product passes through the downstream flame tunnel, making it particularly adhesive.