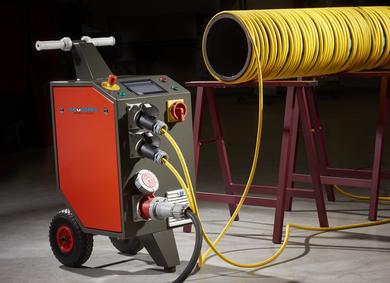 At Wire 2016 in Düsseldorf, Goudsmit Magnetic Systems (hall 15, stand G13) of Waalre (NL) will present a newly developed mobile demagnetization system with which remanent magnetization in metals can be removed or reduced to an acceptable level. This is done in site, on location. The system is completely designed for customer use, without intervention of a specialist. The demagnetization system is automatically configured for use by simply answering a number of questions on the display. Undesired magnetism is often caused by magnetic fields in the immediate vicinity. Common causes include clamping tables, magnetic conveyance, induction heating, tear testing and magnetic grippers. Such magnetization can also be worsened by electric welding, mechanical vibration, grinding, sawing and cold deformation. This can have many different consequences. Plasma soldering is often impossible, because small metal particles and metal dust stick to the surfaces. Adhering materials also cause rapid wear of bearings, breakdowns and waiting time at automatic processing stations, problems with arc welding, unevenness and thickness differences during electro galvanization and chrome plating, or sharp edges during hot-dip galvanization. Quite simply: undesired magnetism costs time and money and has a negative impact on the quality of finished products.

DEMAGNETIZATION SYSTEM
The system consists of a low-frequency generator and a specially designed cable system that is wound around the pipes to form a coil. This generates a strongly alternating magnetic field that dissipates in strength. An example: PE-coated pipes for an oil refinery construction project in southeast India were found to contain remanent magnetism and could therefore not be welded. As a result, the entire project came to a standstill. In this case there were around 40 pipes made of carbon steel, each 12 metres long with a diameter of Ø470 mm. Goudsmit performed the demagnetization on site, a job that took four days. In addition to the recently developed mobile demagnetization system, the company has developed several demagnetization systems in tunnel and table form (optionally in combination with belt or roller conveyor) and another that is a handheld tool.
Check: http://www.goudsmitmagnets.com