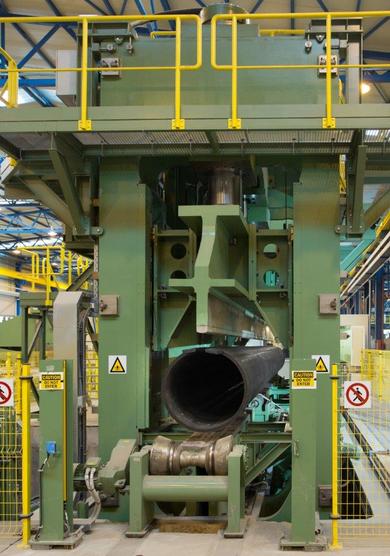 Strategic partnership that pays off

In 2013 Corinth Pipeworks from Athens, Greece, has designated SMS Group as supplier for a 18m JCOE® large-diameter pipe mill for longitudinally welded pipes. Only two years later the first pipe has been welded on the new mill. The plant is designed for a capacity of 400,000 tons of pipes with outside diameters between 16" and 56" in wall thicknesses up to 40 mm and lengths up to 18.3 m.

With the first order, this capacity is now used:

the supply of large diameter pipes both LSAW and HSAW, for a total length of approximately 495 km, for the onshore part of the pipeline across Greece has been entrusted to Corinth Pipeworks by Trans Adriatic Pipeline AG (TAP). The contract for approximately 270,000 tons of 48” diameter line pipe was awarded, in partnership with the Japanese group Marubeni-Itochi Steel, one of the leading steel suppliers worldwide, following an international tender and a strict evaluation procedure. Τhe delivery of line pipes project will begin in 2016 and will be completed in 2017.

A good cooperation that has yielded once again

By investing in the new pipe welding machine Corinth Pipeworks has expanded its product range to satisfy growing global demand for high-strength pipes for the production and transportation of oil and gas. The new CPW large-diameter pipe line is completing its range of products and setting new quality standards. Pipe sizes with high wall thicknesses and small outside diameters can also be produced in cost-effective quantities.

With the JCOE® technology from SMS group Corinth Pipeworks is able to meet the high quality requirements for high-strength pipes for offshore and deep-offshore applications. The pipes produced by Corinth Pipeworks are earmarked for future use by the company‘s customers for supplying energy in the Mediterranean region, Gulf of Mexico, Latin America, West and East Africa, Middle East and in the North Sea. Corinth Pipeworks already successfully operates a HFI pipe welding machine and two-step spiral mill.

“The new state of the art JCOE® large-diameter pipe mill from SMS group establishes the finest technical requirement for severe environmental conditions and challenging applications, as required nowadays by the major oil and gas companies in the offshore industry”,. The plant is equipped with the new SHAPE automation system that precisely controls the forming process using special sensors. Possible negative influences associated with the starting material and operator, are thereby minimized. The system comprises three modular sub-systems, "ShapeBase", "ShapeView" and "ShapeControl", and is designed to achieve optimised forming of longitudinally welded large-diameter pipes during the JCO® process. ShapeView has been implemented at CPW for the first time in the world offering outstanding real-time control of the forming process. Thus the new LSAW mill is the most modern in the world.

Corinth Pipeworks is one of the leading manufacturers of steel pipes globally, which are used in energy projects, as well as large dimensions hollow sections used in the construction sector. With a history of nearly half a century, technological excellence, significant investments in state-of-the-art equipment and a pursuing excellence philosophy, Corinth Pipeworks is a supplier of choice for oil and gas companies, as well as for international construction companies with extensive know-how in the implementation of demanding projects all over the world.