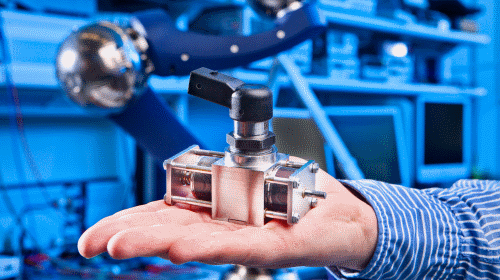 Although it is only about nine centimeters long, it can apply a force of more than 150 newtons — equivalent to a weight of 15 kilograms © Siemens AG

Researchers at Siemens have developed a small but powerful piezo­hydraulic actuator. Although it is only about nine centimeters long, it can apply a force of more than 150 newtons - equivalent to a weight of 15 kilograms. Such actuators are used to operate valves and flaps, for example, and can also be employed in robots.

The concept combines piezomechanics with hydraulics. A voltage causes tiny deflections in a piezoelectric crystal and an internal hydraulic system combines these small movements to generate a rise of two centimeters. Purely electromagnetic actuators loose efficiency if they are very small.

Another advantage of the new actuator is its metallic enclosure, which ensures that all of the required hydraulic fluid is contained in the system so that the actuator only has to be supplied with electricity and not with fluid. Moreover, the actuator is protected against external influences such as dust, humidity, and chemicals.

Piezoelectric crystals expand in a particular direction as soon as a voltage is applied. These crystals are used to drive injection valves in combustion engines, for example. One of their advantages is their dynamic response. Due to their great stiffness, they respond with almost no lag. By contrast, a conventional hydraulic system needs to have a central pump compress the hydraulic fluid in all of the system's pipes before it can generate a mechanical motion.

The piezohydraulic actuator developed by Siemens' global research department Corporate Technology (CT) achieves a high level of stiffness because it only needs six milliliters of hydraulic fluid. The enclosed hydraulic system consists of three adjacent metallic bellows that can expand along an axis and are connected to one another by non-return valves.

If the piezoelectric crystal is excited, it expands into the central chamber, where it creates pressure. This pressure opens the valve to the adjacent chamber, which has an actuator stem attached to its front. The inflowing fluid slightly expands the bellows and the actuator stem is extended. Using a patented integration solution, the developers achieve a total rise of two centimeters: They operate the piezoelectric crystal with a high-frequency sawtooth voltage and combine the rapid succession of small expansions to create a completely smooth motion of the actuator stem.

The concept has two advantages: If the reverse voltage waveform is applied, the pumping direction and the motion are reversed as well. In addition, the actuator maintains its extension once it has been set. By contrast, the actuators used in conventional gears to transmit power cannot withstand vibrations and other influences over the long-run.

The system is a further development of a piezohydraulic actuator that CT created for controlling the valves of large-scale combustion engines such as gas turbines. According to the developers, the new actuator might also be used for other applications such as in robots, in the operation of aircraft ailerons, and in medical and cleanroom technology.