A sprightly 45 - ready for new challenges 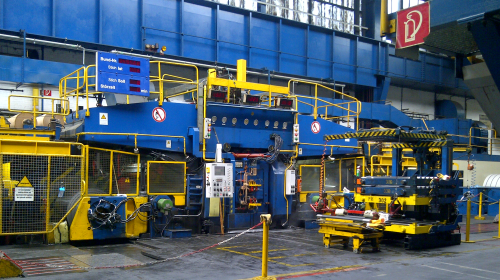 The “SG3” 20-roll cold mill of Outokumpu Nirosta in Krefeld is being revamped. © 2014 SMS Group

Outokumpu Nirosta in Krefeld, Germany, has awarded to SMS Siemag an order to modernize the 20-roll cold mill “SG3” of type MB 21BB-61“. The order was placed at the beginning of September 2014, with the aim of technically updating the 45-year-old cold rolling stand and preparing it to deal with demanding new rolling tasks.

The 20-roll cold rolling mill of stand type Monoblock MB 21BB-61“ had been supplied in 1969 by SMS Siemag (previously Demag). It was modernized in 1991. Following the closure of the Outokumpu works at the Düsseldorf-Benrath location, the production previously carried out there, for example thin mirror-finish material, is being transferred to the Krefeld works.

The “SG3” 20-roll cold mill, with a strip width of 1,570 millimeters,and strip gages of max. 10 millimeters in the entry section and min. 0.50 millimeters in the exit section, will continue to be used for the production of high-grade special-steel strips made of austenitic, ferritic and martensitic materials.

The mill's future rolling tasks will include, in particular, thin-gage ferritic strips in high-gloss quality (2R bright-annealed). The cold rolling mill needs to undergo a certain amount of conversion work in order to satisfy the preconditions for manufacturing mirror-finish material. The SMS Siemag supply scope comprises changes to the entry and exit sides and on the millstand itself.

To achieve the desired strip surface quality, the existing squeezer system is to be converted to a dual-cassette wiper system, including changing device, which can be operated with various types of coated wiper rolls. One of the aims of the conversion work is to enable the entire thickness range to be rolled at maximum rolling speed.

The existing strip cooling system will be equipped with a volume control so as to allow pre-setting of different rolling-oil quantities, depending on the pass schedule. The axial shifting system of the first intermediate rolls is to be renewed in the millstand. The plant is also to be provided with a new millstand door and new exhaust hoods.

The pinch roll situated at the entry end will be replaced by an adjustable, swiveling pinch roll. This will make it easier for the strip to be threaded into the stand. The exit end too will be provided with a bending and pinch roll.

Furthermore, new carry-over tables will ensure that the strip head end can be inserted directly into the reel slot. The above work will help to achieve safe, gentle and rapid threading and tailing-out of the strip and thus ensure the efficient operation of the rolling mill also in the future.

Besides the equipment described above, the SMS Siemag supply scope also comprises the dismantling of the components to be replaced, the performance and supervision of erection of the new equipment items, and the commissioning of these items. A tight time schedule has to be observed here, since the commissioning of the modernized mill is to take place already in July 2015, following a revamp shutdown of 21 days.

This is already the fourth order within a period of a few years for the revamping of a 20-roll cold mill, awarded to SMS Siemag by customers in Germany, and is powerful proof of the confidence in the ability of SMS Siemag to carry out modernization work.