Bonding instead of welding 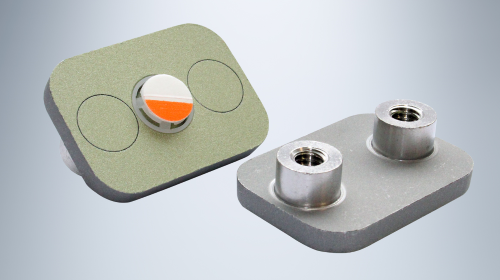 In close cooperation with a leading manufacturer of industrial bonding solutions, Stauff has developed the Stauff Bond System, which is being presented to the European market for the first time at the SMM exhibition.

Offered as an alternative to welding or riveting the base plates of pipe clamps in line with DIN 3015, as has been the standard up to now, Stauff Bond makes it possible to bond pipe clamps onto industrial surfaces such as unprocessed metals, plastics and compound materials.

To achieve this, a transfer plate (type SBP) made of stainless steel is used, on the upper face of which industry-standard fastening elements from the standard range for external pipe diameters of up to 102 mm are incorporated. The lower face of the plate has a special coating and is attached to the base surface using a powerful industrial adhesive also supplied by the company.

The bonding agent used is a high-performance, two-component construction adhesive, which is particularly notable for its quick curing at room temperature. After just 15 to 18 minutes, 75 percent of its full performance is achieved, with 100 percent achieved after 24 hours. Until that point, the fastening aids integrated into the base plate ensure the bond is formed in precisely the right position (without additional load-bearing) and guarantee even contact pressure.

The adhesive is supplied in resealable twin-cartridges and is applied using a manually operated dispenser with specially designed dispenser slides and mixing tips. These virtually eliminate mistakes with mixing quantities, which can negatively influence the performance of the bond. An external source of power is not required, which means the system can be used in safety-critical assembly situations where welding is generally not possible.

Stauff Bond offers increased flexibility in the initial assembly of machines and plants, and makes it possible to implement later changes, expansions or even repairs with comparatively little effort. This considerably reduces the processing times and costs that previously had to be factored in to the assembly process.