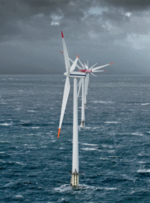 Wind energy is deemed to be an especially eco-friendly and favorable energy source for power genera-tion. Whether wind power plants work efficiently and economically strongly depend on continuous and reliable operation. To ensure this companies like Sulzer Metaplas offer surface solutions optimized for wind turbine components.

Improved surfaces can be achieved by depositing thin coatings or by heat treatment of the steel compo-nents. Application areas are the manufacturing of parts mounted in wind power plants or the optimization of finished components. This article describes compatible coatings and treatments as well as established application areas.

For some of the population, wind power plants are a degradation of landscapes or coasts. But for numerous industrial nations they are the environmentally friendliest technology for energy generation and for meeting energy demands. Furthermore, it has been shown that energy generated by wind power is more cost-effective than nuclear-generated electricity when the disposal, final storage and risk factors for a nuclear accident have been taken into account.
Today wind energy is the fastest growing sector of the renewable energy sources.

During the 1980s, the first wind power plant farms were installed. Since then the development of wind energy is proceeding quickly in Germany and other countries. 1 million tons of steel is used per year for the production of wind turbines in Germany — three times more than in the ship building industry.

Actual data from the German Wind Energy Association (Bundesverbands der Windenergie, BWE) and the VDMA (German Engineering Federation; Verband Deutscher Maschinen- und Anlagenbau) show that in 2013 the energy generated by wind power plants in Germany will match energy production from all energy generation sources for the record year of 2002. As the world slowly turns away from the nuclear power, wind energy becomes more important.

China, as the biggest producer of wind energy together with the USA and Germany, produce about 60% of the worldwide installed capacity. Nevertheless, these countries have a great potential for the coming years. Yet other nations have a higher proportion of wind energy for their national energy consumption. Here Denmark is tops with 28% while Spain and Portugal place second and third with approx. 15%. In Germany, as greatest wind energy producer in Europe, the wind energy is only 10% of the total energy consumption.

During the next years wind power plants onshore as well as offshore are planned. By the end of 2012, the world had 2052 offshore wind power plants (73 wind power farms) with a generating capacity of 5863 MW. Those offshore power plants located further away from the coast have a more favorable acceptance with populations.

The German government, for example, will focus more on offshore power plants in the future and they want to invest in wind power plants as part of the electricity supply system expansion according to the amendment of the Renewable Energies Act (EEG; “Erneuerbare Energien Gesetz”).

The requirements for wind power plants are very diverse, affected by differences in local and meteorological conditions. Offshore plants in particular have to deal with corro-sion due to salt and dampness.

Also “re-powering” will play an important role in the next years as the design of wind power plants increase in size and performance. Repowering replaces older plants with newer, higher performance power plants. Besides requirements for minimizing downtimes, increasing performance and efficiency, wind power plants have to withstand enormous and often changes forces by ex-ternal influences.

The powertrain of a wind power plant is especially subjected to high loads and stresses. At the same time, this makes them susceptible to higher maintenance and repairs. Downtime caused by drive train and gearbox damage is particularly high, as data of the Fraunhofer Institute show. To maximize plant profitability, downtimes and maintenance work has to be minimized. The most common causes for wind power plants failures are wear and component fatigue, such as on gearwheels, which lead to long downtimes.

The construction materials used have to withstand enormous stresses, diverse forces, high impact momentum and torsion. Gearboxes that change the rotary speed and the torque of the rotor and generator are common.

There, for example, a comparatively slow rotor rotational speed (in the range of 6 – 20 min-1) is transformed into a high generator speed of 900 – 2000 min-1 to achieve a high efficiency energy generation factor. Over the entire life of a modern wind energy power plant, this corresponds to a transmission capacity of approx. 144 million rotations of the rotor shaft or 15 billion rotations of the generator shaft.

To guarantee a high and reliable performance level it is necessary to use steel that has an enormous wear and fatigue strength. Furthermore, the material must have high toughness and vibration strength to resist the strong stresses.

The flanks of gears, for example, have to be protected against wear and pitting. High surface pressure is exerted on the gear tooth when engaged and plastic deformation has to be prevented on the ductile outer zone. Likewise, the flanks have to withstand wear and fatigue from high frictional forces.

Besides services for surface improvements for different industry and application areas the own system manufacturing provides innovative developments by its research and development work. A special feature is the possibility to coat big and long parts. The maximum dimensions for large volume parts are a length of 1800 mm and a diameter of 1500 mm; also long components with a length up to 4500 mm and 600 mm in diameter can be treated.