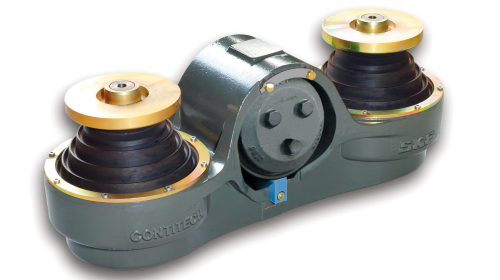 Trains should be quieter - up to 50 percent by 2020. "Studies have shown that real success is only possible through the combination of various methods," says Hubertus Gawinski, Head of research and development at ContiTech Air Spring Systems. "For that reason, ContiTech is continuously involved in research, because air spring systems can also contribute to successful noise reduction."

The project was backed by the Deutsche Bahn and had the ambitious goal of reducing rail traffic noise up to 50 percent by 2020. The rail company's first act was to begin using the LL brake shoe, approved in 2013, in freight trains. It is a brake lining made of composite plastic.

Other technologies, such as the Gigabox, reduced noise further. The ContiTech spring system consists of a wheelset bearing and two hydraulic springs integrated into a single axle housing and is especially developed for rail freight transport. It does not only reduce wear to the rails, wheels and bogie, but makes for a much smoother ride.

On test tracks, the system reduced noise by 2.5 to 3 decibels. "So far, deployment has been hampered by cost," notes Friedrich Hoppmann, Head of the segment ContiTech Railway Engineering. "However, the cost will drop fast if the system becomes standard."

ContiTech is looking into other ways to reduce noise and will continue to work with the railway system on other research projects. “Only when we succeed in making freight traffic on the railroads both quieter and cheaper can we assure its future,” says Gawinski.