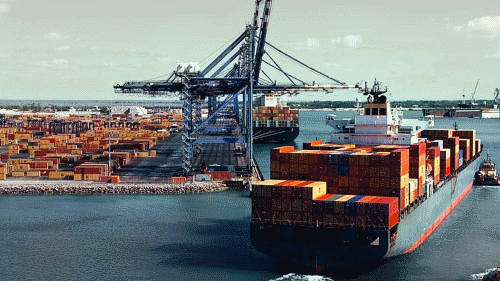 A revolution in the production of sliding bearings: it’s only necessary to apply a layer of metal a few millimeters thick using the powder nozzle to reliably, cost-effectively, and easily protect the large shaft bearings used in ships from wear and tear.

The enormous container ships that now crisscross the world’s seas need powerful drives: diesel engines with outputs of up to 110,000 PS and as many as 14 cylinders. The shaft that drives the propeller has a diameter of about 600 mm, weighs up to 300 tonnes, and rotates 84 times a minute. The shaft rests inside hydrodynamic bearings that are naturally subject to heavy wear. This is because the shaft is in direct contact with and slides over the bearing’s surface. A film of lubricant reduces the inevitable friction, but doesn’t develop fully until the oil pressure rises.

Especially when engaging or disengaging the shaft, the protective film of oil is not yet or no longer sufficient to prevent direct contact between the surfaces. The affected parts of the bearing are therefore subjected to considerable friction and wear, which significantly reduces their life expectancy.

A commonly used way to improve the performance of these bearings is to cast their halves with an unbroken surface layer of a tribological, in other words wear-reducing, alloy. The conventional process used for this is extremely labor-intensive: the metals are melted and worked at 700°C. Then, in a laborious finishing phase, around 90% of the material is removed again to obtain the desired final shape. Little has changed in this process over the last century.

Today, latest-generation lasers can be used with a powder nozzle for direct metal deposition, yielding considerable benefits: the metal alloy is fed in the form of a dry powder via the nozzle coaxially to the laser and melted onto the inside of the concave steel bearing shells. The laser permits accurate partial attachment of the alloy.

It is only necessary to apply the expensive alloy to about 20% of the surface using this technique, compared to 100% with the traditional casting method. Use of a laser also saves time and energy, since only a small amount of metal needs to be melted in each case.

The new generation of additive manufacturing is especially well-suited for bearings that are in constant use, have a large diameter, and are subjected to large bearing forces and high rotational speeds. It can also be used to inexpensively repair defective bearing shells and restore them to a like-new condition.

The ability to quickly change the alloy and apply coatings of nearly any kind of metal opens up incredible prospects for developing new products. AM enables completely new production processes that are able to flexibly accommodate customer wishes in a minimum of time.

Recently, the Berlin-based company of ADMOS Gleitlager began using a laser system from OR LASER. In addition to having more than 100 years of experience producing cast compound hydrodynamic sliding bearings, it is constantly engaged in improving its products and methods.

ADMOS is now taking a new approach to making sliding bearings: with a robot-assisted laser system, a six-kilowatt fiber laser, and two high-power coating heads in the form of powder nozzles. Something that was impossible with the conventional casting process is now becoming reality: namely the use of copper-based materials such as CuSn and CuPb. One of the many advantages of the new approach is that different materials now bind more firmly to one another. All in all, the new method makes it possible to completely eliminate several steps while minimizing the required finishing work afterward.

Right after powering up the laser system for the first time, it became clear that it reduced materials costs by between 50% and 80% thanks to resource-efficient application. The energy costs are also 50% to 70% less than for conventional casting of alloys.

Jörg Hosemann, the CEO of ADMOS Gleitlager, is thrilled: “The new laser system opens up a whole new world of possibilities for us: faster production and delivery at short notice, as well as enormous potential for slashing costs. I expect the investment in new laser equipment to pay for itself in no time.”