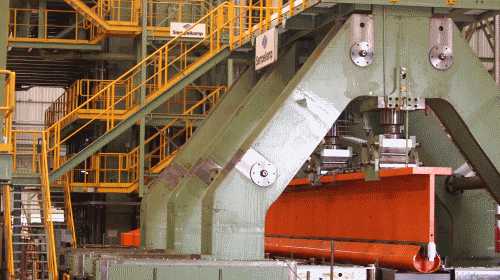 At TUBE 2014 Siempelkamp introduces pipe forming presses with an innovative energy-efficient drive system. The company equipped the oil-hydraulic drive of the moving beam with variable-speed high-pressure pumps. With this new control concept, the potential energy as well as the energy stored inside the elasticities during the forming process can be recovered. Following, the energy is then fed back as electricity into the supply network.

The new concept has proven itself for the production of longitudinally welded pipeline pipes at Tenaris Confab in Brazil. The company had ordered a 500 MN O-forming press for its location in Pindamonhangaba in the state of São Paulo in March 2011. Nine months later an order for an 18 MN U-forming press was placed. From the get-go in January 2013 it became clear that both presses had a significantly lower energy consumption than traditional presses.

With both presses, Tenaris will produce grade X70 pipes with a wall thickness of up to 55 mm and an external diameter ranging between 12 ¾" – 48". The presses will also allow material grades X80 and X100 to be processed into pipes.

The 500 MN O-forming press is equipped with 5 main cylinders over a length of 12.5 m and applies a force of 40,000 kN per meter. Combined with Siempelkamp's patented multi-cylinder parallelism control, the control ensures that the moving beam maintains a position parallel to the press table within a tolerance of +/- 1 mm over the entire length.

The modular tool concept, which was developed together with the customer, significantly reduces the tool costs per each pipe diameter. Furthermore, the press features quick and, at the same time, precise adjustments to different plate sizes. The 18 MN U-forming press replaces an old 9 MN U-forming press from the 1970. With an automated tool change system and an automated clamping system for tool segments, the setup times are reduced.

Innovative drive systems provide for efficient use of energy

Both Tenaris presses – as all Siempelkamp presses for metal forming – represent the perfect balance between custom and standardized design. They are perfectly adjusted to the production needs of the customer and allow, due to the use of identical parts, a quick spare parts supply and high storage efficiency.