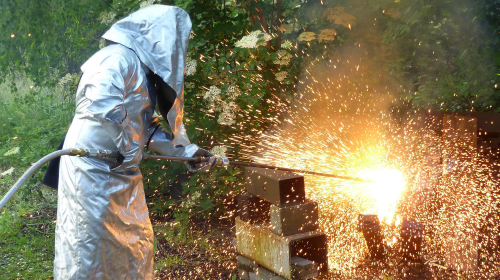 With images such as a spectacular one of flying sparks or a line of hoses or taken from a very unusual angle - this year's ContiTech photo competition more than met its organizers' expectations. The competition was looking for the most eye-catching images of industrial hoses from ContiTech Fluid Technology in use.

All the pictures feature exciting subjects and unusual perspectives. That is particularly true of the images of operational products which were voted the three best in the competition by the judges. Almost 300 photos were uploaded to the competition website.

"We were delighted to see the many great photos which impressively illustrate the applications for our hoses," declares Hubert Butterwegge, Head of Marketing and Sales in the Industrial Hoses segment in the ContiTech business unit, summing up the competition. "Even though we couldn't award a prize for every photo, we would like to thank everyone who took part in our competition."

The 25 winning photos were selected by the judges from the 50 best photos voted for by the visitors to the competition website.

The photographers who took the winning photos will enjoy some attractive prizes: the spectacular first-placed photo of flying sparks wins a a three-day trip for two people to New York including two nights.

Second prize went to an image of a line made up of the versatile FLUOROPAL® hose, and the third-placed picture is a fisheye shot of an AQUAPAL® drinking water hose.