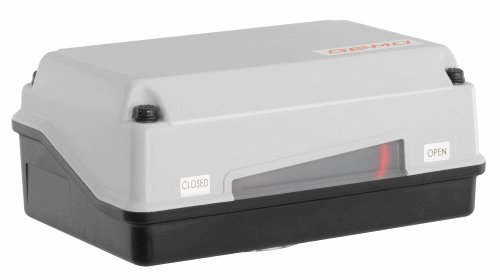 Motorized quarter turn actuators are used, amongst other things, to actuate butterfly valves and ball valves. They can perform simple open/close movements and, depending on the version, also carry out control tasks.

The GEMÜ 9428 and GEMÜ 9468 series have already been established for some time now and boast a robust and reliable design. The special feature of these actuators, in addition to a solid and low-wear design, is the way in which power is transmitted to the shaft of the respective valve.

More specifically, this means that the torque in the end positions with a constant motor load increases and the speed at a constant motor speed decreases simultaneously. This special design feature brings the nominal torque of the actuator into line with the closing characteristic curve of a quarter turn valve. This not only achieves a constant load on the electric motor being used by avoiding peak loads, it also improves controllability.

The new version of the GEMÜ 9428 actuator with a nominal torque of 55 Nm completes the two series. With this extension to the portfolio, we now offer a comprehensive product range with nominal torques from 6 Nm up to 400 Nm. Depending on the version, travel times of between 4 and 29 seconds can be implemented.

The actuators feature an optical position indicator as standard, as well as a manual override. The end positions of the quarter turn valve can be adjusted via a microswitch. In addition to an emergency power supply, there is also an option to activate different signalling devices using two potential-free limit switches. A control module can also be integrated. The GEMÜ 9428 and 9468 motorized quarter turn actuators feature a compact design and can be used not only for GEMÜ butterfly valves and ball valves, but for all valves with a travel range of 90° and a standard flange in accordance with EN ISO 5211.

The motor and gearbox are housed in a weather-resistant plastic housing. Both quarter turn actuators are designed for DC and AC operating voltages and can be supplied with different electrical connection options depending on the applications.