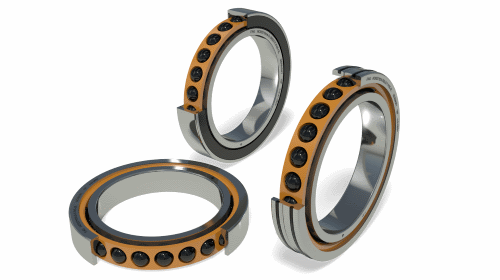 The B-series spindle bearings form the basis for the FAG spindle bearing range and can be used on a wide range of spindle applications. They are characterized by precision, very good speed characteristics, and a high load carrying capacity. As a technology leader in main spindle bearings, Schaeffler has further developed and optimized the spindle bearings of the dimension series B719 and B70 as part of the continuous product improvement program.

In addition to reduced contact angle tolerances and improved ball quality, the bearings also have an adapted sealing concept. For the first time, B-series spindle bearings are also fitted with a high-speed cage as the standard cage.

High-speed cage as the new standard

Reduced weight and high rigidity are basic requirements for high speeds and the best possible acceleration of a cage. These criteria are met by the high-speed cage of the RS (robust and fast) spindle bearing series that has successfully proven itself in the field for several years. This new standard cage is now being used for the first time in the angular contact ball bearing series B719 and B70.

Depending on the bearing size, using this cage generates a reduction in weight of 15-20%, a 5-10% increase in tensile strength, and an increase in the bending strength of more than 20% compared to the previous standard cage. A new cage design and improved surfaces also measurably reduce the running temperature and the frictional torque: Friction is approximately 15% less in upper speed ranges.

In addition to the improved friction properties, comparative tests were able to establish that the cages manufactured according to the new standard were less prone to noise development and so-called "cage chattering".

In addition to the cage design, Schaeffler has also revised the seal design for sealed bearings by improving the roundness of the outer ring. Diameter deviations and roundness errors are compensated by a radial clearance in the relevant area. Furthermore, all seals in FAG spindle bearings are free from the DEHP plasticizer, which is classified as harmful and which, with effect from 2015, will be prohibited by the European Chemical Regulation REACH.

Reducing the contact angle variation by 35-50% depending on the design allows for increased uniformity in terms of rigidity, kinematics, and preload. The resulting uniform load on the bearings, on multi-row arrangements in particular, results in targeted and constant operating conditions for the customer. Reduced ball tolerances also ensure reduced noise excitation.

At the start of the year, the first bearings to implement the new standard were bearings of dimension series B719. By the end of 2015, the standard will apply to all spindle bearings of dimension series B719 and B70. Changing to the new standard will initially affect all bearings with outside diameters smaller than 160 mm. The measures do not constitute any modifications to the internal design that require approval and they will ensue exclusively as part of the continuous product support.