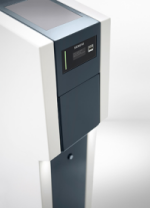 By doubling the output to 22 kilowatts, the charging station cuts charging times in half. The station is also protected against vandalism, thanks to a doubly secured charging cable and the option of connecting the device to a remote surveillance system so that it can be used as part of a smart grid.

More and more electric cars will be found on Germany’s roads in the future. And because their batteries will have to be recharged more often than vehicles with combustion engines will need to be refueled, the wide-scale use of electric automobiles will require short charging times, a convenient payment system, anti-vandalism protection, devices that are safe and easy to operate, and the possibility of dynamically managing the charging current via a control center.

The developers at Siemens Energy took all of these requirements into account when they were creating the Charge CP700A charging station. When charging, the station secures the vehicle plug and the loading flap to prevent the cable from being detached without authorization. In its fastest mode of operation, the station has a charging output of 22 kilowatts and a three-phase alternating current of 32 amperes, enabling it to recharge vehicles within one hour. The station can also recharge batteries at a lower level of output. To make this possible, the station communicates with the vehicle via the charging cable to make sure that the battery is charged at a rate the vehicle can handle.

Outdoor lighting signalizes at a distance whether or not the station is occupied. The system is very user-friendly: Motorists register for the charging and payment process using a non-contact chip card and launch the charging process from a display. Electric current doesn’t flow through the cable until the command is given to start the charging process. Until that point the station’s power socket doesn’t have any voltage, so operation is safe and reliable.

Prototypes of this charging station have already been used in projects conducted by the German Ministry of the Environment in various model regions of the country. The new charging station will also be used in the EU-sponsored Green eMotion project, for which Siemens is the consortium leader.