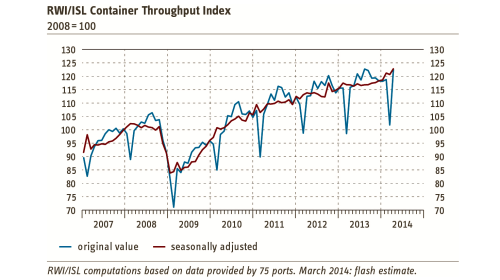 The Container Throughput Index of the Rheinisch-Westfälisches Institut für Wirtschaftsforschung (RWI) and the Institute of Shipping Economics and Logistics (ISL) climbed from 120.5 points (revised) to 122.6 points in March and therewith reached a new all-time-high. Although the upward movement might be biased as a result of the delayed impact of the Chinese New Year holidays, the index gained a total of 5 points during the last six months, which is an indicator for a solid growth in world trade.

The index figures for January and February have been revised upwards by 0.7 and 1.2 points, respectively, since last month's publication - an unusually large adjustment. Partially, these changes reflect the unavoidable revisions related to the seasonal adjustment of the index. The Chinese New Year has a strong impact on the seasonal factors as February regularly is one of the weakest months in terms of handling volumes due to the Chinese holidays. The flash estimate for March is based on the handlings volumes of 37 ports, which are only representing half of the handling volume covered in the index. Since figures for some heavyweight Chinese ports are missing, larger revisions are possible.

The Index is based on data of 75 world container ports covering approximately 60% of worldwide container handling. The ports are continuously monitored by the ISL as part of their market analysis. Because large parts of international merchandise trade are transported by ship, the development of port handling is a good indicator for world trade. As many ports release information about their activities only two weeks after the end of the respective month, the RWI/ISL Container Throughput Index is a reliable early indicator for the development of international merchandise trade and hence for the activity of the global economy.

The RWI/ISL Container Throughput Index for April 2014 will be published on May 22nd.