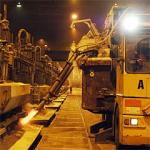 OLD TECHNOLOGY: Due to more stringent emission requirements, the Søderberg potlines at Karmøy were in any case due for closure by the end of 2009. (Photo: Helge Hansen)

Hydro has for a long time been working to establish a power platform that would enable a major new investment to be made at Karmøy. This has proved to be difficult, but it is the extreme market situation that is now making the company shelve its plans for a new, modern production line at the plant.

Due to more stringent emission requirements imposed by the Norwegian Pollution Control Authority (SFT), the Søderberg potlines at Karmøy were in any case due for closure by the end of 2009. Hydro had for a long time considered the possibility of bridging this phasing-out with a new investment process, thereby transferring Søderberg employees to a new, modern production line. The company now sees that this is not possible.

Last week Hydro decided to reduce production from the Søderberg potlines at Karmøy by 20 percent from December. This is equivalent to an annual production of 24,000 tonnes of primary aluminium.

“The extreme market situation means that the company has to consider production cuts over and above those already implemented. Old and expensive production is first in line here,” says Hydro Executive Vice President Hilde M. Aasheim, who is responsible for the Aluminium Metal area.

“The conditions for making a major investment decision at Karmøy are not in place right now. Neither is there any reason to apply to SFT for a new emission permit for the Søderberg potlines after 2009,” says Aasheim. But she does underline that it will still be possible to decide to invest in a modern, new production line at a later date.

The Søderberg potlines at Karmøy produce 120,000 tonnes annually. Once this technology has been phased out, annual production at the Karmøy aluminium plant will stand at around 170,000 tonnes. Hydro has calculated that about 450 of the 1,400 people currently working at the plant will possibly be affected by the closure.

The question of production adjustments at Hydro’s Søderberg potlines at Karmøy will be considered by Hydro’s board of directors and corporate assembly in December.