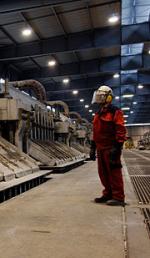 Hydro’s primary aluminium plant in Neuss has an annual capacity of 230,000 tonnes, and a 13 percent cut will reduce the annual production by 30,000 tonnes per year. The plant has 650 permanent employees.

“The Neuss smelter is at the very high end of the cost curve, mainly due to the German power cost level, which is among the highest in the world. The planned production cut in Neuss is a direct consequence of the weak market situation and global downturn in metal demand,” says Hilde Merete Aasheim, executive vice president for Hydro’s Aluminium Metal business area.

Including the previously announced permanent closure of the old Søderberg line at Karmøy and reduced production at Søral in Norway, Hydro has now committed itself to reduce production by approximately 170,000 tonnes aluminium annually, corresponding to 10 percent of its primary aluminium production capacity.

All of the reductions will be complete by the end of the first quarter this year and to date about 40 percent of this capacity has been cut.

At the Neuss smelter, 30,000 tonnes of annual capacity will be mothballed until further notice. The reduction is starting with immediate effect and is due to be completed by the end of January. Following the reduction, the smelter will produce 200,000 tonnes aluminium per year.

“With the high power cost in Germany and the very weak aluminium market, Hydro will continue to evaluate our remaining production capacity at Neuss and at all our other smelters worldwide,” says Aasheim.