IFT and Schaeffler Engineering merge to form a single company 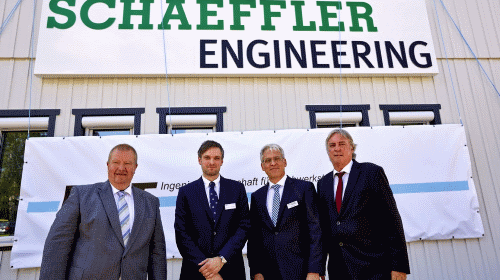 The merging of the two service providers had been planned ever since the 100% takeo-ver of IFT by Schaeffler AG in 2013. "IFT is a well-established expert in fields such as testing valve trains and timing drives as well as planning and constructing customer-specific test stands", explains Rolf Laufs, CEO of Schaeffler Engineering. The company's location in Clausthal-Zellerfeld includes 39 test cells with 80 component test stands and 6 complete engine test stands.

Speaking at the ceremony to mark IFT's 25th anniversary last Tuesday, Prof. Dr.-Ing. Peter Gutzmer, Deputy CEO and Chief Technology Officer at Schaeffler AG, emphasized that "Partners like IFT and Schaeffler Engineering are indispensable for automobile man-ufacturers and suppliers like Schaeffler. The demands that have to be met have changed dramatically since 1990, and the current focus is primarily on mobility for tomorrow. This places enormous pressure on manufacturers and suppliers in terms of development, to which they can only respond with the support of partners who, to an increasing degree, not only provide assistance but also take over entire developments.

Around 200 guests, including district administrator Thomas Brych and Clausthal-Zellerfeld's mayor Britta Schweigel, joined the 80 IFT employees to celebrate the compa-ny's 25th anniversary on June 30, 2015. "It all began in 1990 - with four employees working in rooms at the Clausthal University of Technology", IFT location manager Christo-pher Lehne remembered during his speech at the anniversary celebrations.

In summarizing IFT's first quarter-century, he spoke of how, following its beginnings as a spin-off of the university, the company went on to achieve a worldwide reputation as a specialist in the field of mechanical engine systems "of which our employees can be justifiably proud" over the following years. Through strategic expansion of its test stand expertise, Schaeffler Engineering will position its test stand services as a third and separate business field in the future, alongside its engineering services and products.