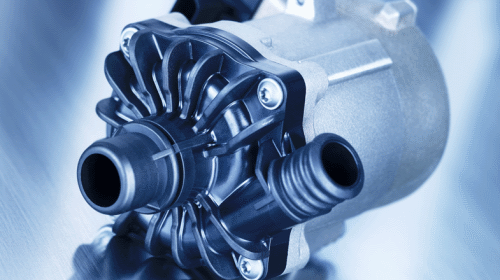 For the twentieth time now the US trade journal Ward's Auto World has presented its Ten Best Engines award for engines in North America that best set new benchmarks. The award ceremony is regularly held at the North American Auto Show (NAIAS).

Prominent among the ten winners this year were diesel engines, turbocharged and supercharged engines as well as one electric motor. As many as seven of these use components from first-tier auto-industry supplier KSPG (formerly Kolbenschmidt Pierburg).

The first in the alphabetical list is the Audi S5 with a 3.0-L TFSI supercharged V6 engine. So, for the fifth time now Audi is in the Ward's list and on four occasions with this very same engine. The KSPG Group supplies the engine block, the secondary oil pump, the secondary air valve, the solenoid valves, and the thrust washers.

The next is the BMW 535 3.0-L twin-turbo 1-6 diesel. KSPG content is the electrical switching valve and the control valve. Also among the winners is the turbocharged engine on the Chevrolet Cruze 2.0 L. This four-cylinder unit has its EVR and TC valves as well as its EDC-motor driven throttle body from KSPG.

The sole battery-electric powered unit among the top ten listed is that on the Fiat 500e where the cooling functions are handled by a CWA 50 and 100 from Pierburg Pump Technology GmbH, again a member of the Group.

Another award-winner is the Ford Fiesta 1.0-L EcoBoost 3-cylinder engine which has pistons, vacuum regulating valves and throttle body all from KSPG, and the Porsche Cayman 2.7-L H-6 engine with engine block, solenoid valves and thrust washers from KSPG.

A further member of this prestigious list is the unit on the Volkswagen Jetta, the 1.8 L EA 888 turbocharged 4-cylinder engine with pistons, secondary air pump, secondary air valve, solenoid valves, thrust washers, crankshaft bearings and conrod bearings all from KSPG.

Eight editors from the renowned US trade journal Ward's test the engines on daily operation around Detroit. Only eligible for inclusion are engines that are completely new, significantly overhauled and on the US market during the first quarter of the respective year. Within the industry, the awards are regarded as benchmarks for developments in automotive technology.