WITTENSTEIN motion control has even more power in the pipeline 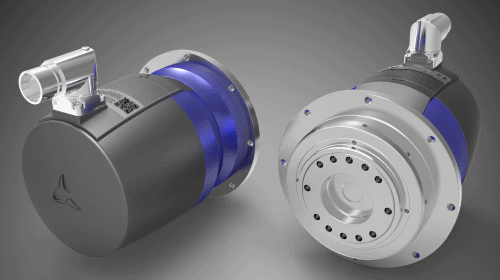 The brand new series was unveiled at this year's SPS IPC Drives exhibition in Nuremberg under the heading "THE SERVO ACTUATOR" as an upcoming product to be launched in the first six months of 2015.

It isn't just the impressive specifications - with their groundbreaking, contemporary design, these servo actuators was a genuine eye-catcher at the WITTENSTEIN booth.

The new generation pushes back traditional power density boundaries in mechatronic drive technology: the SERVO ACTUATOR has an almost identical physical volume yet delivers up to twice as much power. It's a similar story when it comes to energy efficiency: up to 80% more torque with virtually no increase in current consumption represents another new benchmark. The actuators can still be used with the same servo amplifiers - but in future with double the output.

The SERVO ACTUATOR will be available in several sizes, probably for all torques from 60 to 2000 Nm. The reduction ratios will also cover a wide range, with the emphasis planned on preferred ratios between i=10 and i=100.

As far as integrated encoders for transferring parameter and control data are concerned, the SERVO ACTUATOR's interface portfolio will focus on Endat 2.2, DRIVE-CLiQ and HIPERFACE® DSL, the three digital standards that are predicted to dominate tomorrow's market. The one-cable connection with HIPERFACE® DSL technology in particular has a number of points in its favour - for example, less cable material and fewer connectors, space-saving wiring arrangements in cable carriers or bushings and weight reductions on the vertical and handling axes.

By rating these products for 750 V DC bus voltage, WITTENSTEIN motion control moreover mirrors the trend towards higher servo amplifier speeds with the same torque as a strategy for further increasing performance.

The design of the new SERVO ACTUATOR series is innovative and future oriented - indeed, one could even say futuristic. The absolutely smooth surface with no dead spaces, the elimination of almost all visible threads and screw heads and the modern, stylish housing simultaneously mean a new benchmark in terms of look & feel.

The many different aspects of safety, security and reliability in mechatronic drive technology are also systematically implemented in the new servo actuators. Amongst other things, they will have a significantly higher holding torque that is developed at 1.5 times the static torque.

In addition, they will meet the requirements of relevant international standards for functional safety in conjunction with the digital encoder variants for Endat 2.2, DRIVE-CLiQ and HIPERFACE® DSL. A set of integrated safety functions, such as the availability of redundant position data, will likewise open up numerous safety applications for the SERVO ACTUATOR.