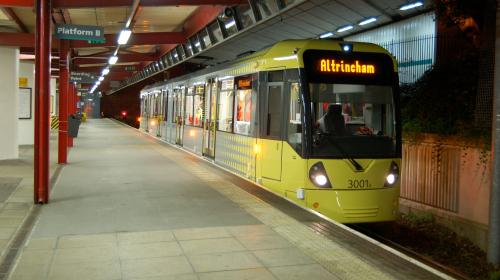 Transport for Greater Manchester (TfGM) requests delivery of another 16 high-floor light rail vehicles of the type M 5000 from the consortium partners Bombardier Transportation and Vossloh Kiepe. The original contract from 2007 includes several options, on the basis of which different amounts of vehicles were ordered in the last few years.

Ten vehicles were ordered in the spring of 2014 within the scope of the last option. With this new order for another 16 LVRs the TfGM has now ordered altogether 120 high-floor vehicles, which continuously replace old vehicles of the Metrolink fleet.

Vossloh Kiepe delivers the electrical traction equipment as well as the heating, ventilation and air conditioning devices, the passenger information system and the motor gear units.

The M 5000 vehicles are equipped with a special on-board converter (BNU 524), which stands out due to its better performance at lower weight, which is realised by way of its energy-efficient high-frequency circuit technology.

The new M 5000 vehicles, which are manufactured by Bombardier in Vienna, can transport up to 200 passengers. Broad double doors make it easy for passengers in wheelchairs or with prams to board and alight.