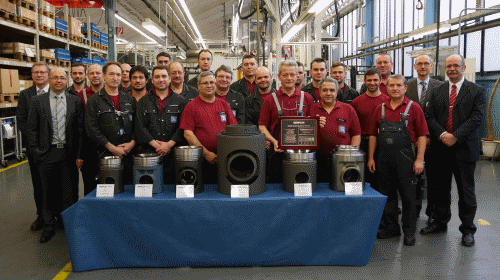 The SQEP (Supplier Quality Excellence Program) award is the construction equipment manufacturer's reward for continued first-class delivery and product quality performance. Last year, KS Kolbenschmidt had been presented with Silver and before that with Bronze on a number of occasions.

Caterpillar is among the most important customers at Neckarsulm, Germany, at Marinette, USA, and at the large-bore piston plant in Kunshan, China. The award was handed over to the team by Wolfgang Roth of Caterpillar, Kiel, during a presentation ceremony. Although the award primarily refers to Neckarsulm, the assessment does take into account the pistons produced outside of Germany and marketed through the German location.

Prior to the annual award, Caterpillar assesses its suppliers according to criteria of quality, on-time delivery, customer satisfaction, innovation, and improvements. Last year, KS Kolbenschmidt showed significant improvements especially regarding delivery performance (now over 97 percent) and a reduction in complaints. "The objective for 2014 had, in fact, been to stabilize the level of quality achieved and thus go for Silver," says Quality Manager at Large-Bore Pistons Mahmut Gülbahar. "It was only then that we intended to aim for the ambitious Gold award. Thanks to the very good performance of the entire team we have already managed to meet the Gold award requirements and we are proud of it."

Caterpillar, head-quartered in the USA, is the world's leading manufacturer of construction and mining equipment, diesel and natural gas engines, industrial gas turbines and diesel-electric locomotives. Caterpillar engines and engine systems provide power to the world's trucks, ships and boats, CAT construction and mining machines, and much more. Caterpillar Motoren GmbH & Co. KG, head-quartered in Kiel, Germany, is supplied from Neckarsulm with the complete piston family embracing aluminum monobloc pistons, assembled pistons with a top part in steel and a lower in ductile cast iron as well as forged aluminum. Diameters range from 200 to 460 mm.