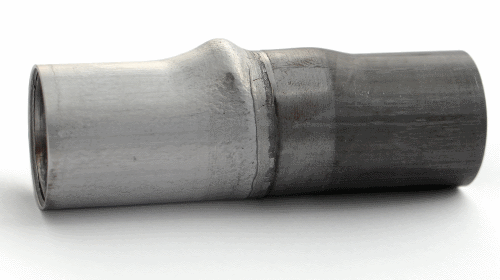 Successful forming experiment: The tube is half made of aluminum, half of steel. The laser-brazed joint area withstood the hydroforming process. (Photo: IPH)

Joint forming of steel and aluminum: This is possible thanks to the new technology developed by researchers from Hannover. Tubes made of different materials are joined by laser brazing and soldering and then shaped by hydroforming – without rupturing joints. This technology will help to produce ultra-lightweight parts, revolutionizing future car body construction. At EuroBLECH, the researchers will present their results to the broad public for the first time.

With hydroforming of hybrid tubes – so-called tailored hybrid tubes – the researchers have succeeded in combining two lightweight design approaches for the first time: weight reduction based on structural design and based on material. Generally, tubes are perfectly suitable for lightweight construction, because they are extremely stiff and sturdy in proportion to their weight. If made out of steel and aluminum, even more weight saving is possible. Only those sections subjected to high stresses would have to be made of heavy but strong steel – the rest of the part could be made of lightweight aluminum.

However, manufacturing such hybrid parts is very challenging, because shaping steel is much harder than shaping aluminum. Moreover, prior to the forming process, the tube sections have to be joined in such a way that subsequent rupturing is excluded. Welding is out of question: Weld seams are brittle and not suited for the later forming process.

Researchers of the Institut für Integrierte Produktion Hannover (IPH) gGmbH and the Laser Zentrum Hannover e.V. (LZH) have jointly solved the problem by the development of tailored hybrid tubes which can be shaped by hydroforming. They joined steel and aluminum using a laser brazing and soldering process. The aluminum-silicon solder is locally heated and melted with a laser beam. Since heat input is very low, no formation of brittle substances affects the seam’s mechanical properties during forming.

Laser-brased joints withstand pressures of max. 900 bar without rupturing. In hydroforming, 900 bar are more than enough to shape both aluminum and steel. To obtain a preferably uniform shaping result, the researchers have tested different material qualities. Their conclusion: Forming is best when combining steel (E235+C) with higher strength aluminum alloy (EN AW-6082).

During hydroforming, a tube is placed into a mould and filled with water. With increasing pressure, the tube slowly assumes the shape of the mould – a way to shape nearly every structural design. During the forming experiments, the researchers’ focus was primarily on the joint area and its forming behaviour. Their aim was to determine the joint area’s capacity to withstand stresses and the limitations of this technology.

In practice, rather those tube sections would be shaped which are farer away from the joint area. For example, this would facilitate the production of ultra-lightweight parts for car body construction: Critical zones subjected to high forces in case of an accident – like B-pillar connecting points – would be made of steel, less stressed zones would be made of aluminum. To refine the process and scale it up to manufacturing standards, the researchers are constantly looking for further applications for hydroforming of tailored hybrid tubes.

The researchers will present their promising results at EuroBLECH, taking place at the Messegelände exhibition grounds in Hannover from 25 to 29 October 2016. The Institut für Integrierte Produktion Hannover (IPH) gGmbH can be found in Hall 11, Stand B07 on the joint stand of the European Research Association for Sheet Metal Working (EFB).