Revamping project to increase flexibility and economy of production 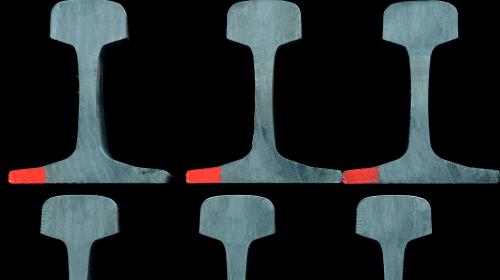 Cross-sections of rails rolled on a universal mill © SMS Group

ArcelorMittal Espana S.A. has contracted SMS group to revamp its rail rolling mill in Gijón. The modernization project will entail the conversion from conventional two-high rolling to the more economical universal rolling method. The project is also intended to increase the selling length of the rails from 90 to 108 meters.

Rails rolled on universal mills are produced at lower costs, feature improved dimensional accuracy and enhanced surface quality and are the rails of choice for high-speed railway lines.

The central element of the revamp will be the installation of a mill train consisting of a universal stand and an edger, both of which will be designed as CCS® stands (Compact Cartridge Stand). This stand type has been successfully in operation in numerous rail and section mills. Additionally, the existing finishing stand will be replaced by a universal stand. All stands will feature hydraulic screwdown. This ensures a higher rail quality and provides higher availability and flexibility of the rolling mill.

The order scope also includes adaptations to the reversing break-down mill, to the roll shop and to the media supply system. SMS group will install the equipment and adapt the automation system. Also the roll pass design and the mill guides for all stands will be supplied by SMS-technology that has proved highly successful in numerous rail rolling mills.

To minimize the production loss, the modifications to the equipment will be implemented during several scheduled line stoppages of short duration. The main activities will take place in summer 2016.

Worldwide, a total of 16 universal rail rolling mills have been supplied or revamped since 2000. Twelve of those projects were handled by SMS. With this project for ArcelorMittal, SMS group is further strengthening its leading position as suppliers of rail and section rolling mills.

The SMS group is, under the roof of SMS Holding GmbH, a group of companies internationally active in plant construction and mechanical engineering for the steel and nonferrous metals industry. Its 14,000 employees generate sales of over EUR 3,4 bn.