ContiTech singles out Supplier of the Year 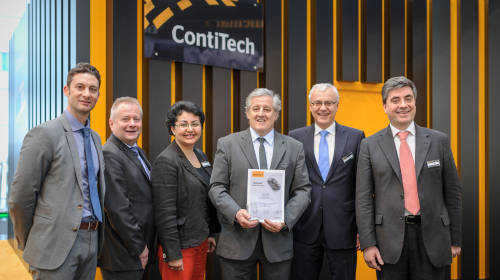 Congratulations on being singled out as supplier of the year: Heinz-Gerhard Wente (2nd from the right), Hicran Hayik-Koller (3rd from the left) and Thomas Rieth (2nd from the left) presenting the awards certificate to Dr. Vittorio Bortolon, general manager of SO.F.TER S.p.A. in Germany, with Paolo Contelli, key account manager Germany, on the far right and Dr. Alessandro Giodani from technical services on the far left © ContiTech AG

ContiTech Vibration Control has singled out the Italian compounding specialist SO.F.TER S.p.A. as supplier of the year 2013. "All supplies arrive on time and in the quality agreed upon. And this holds true not only for Germany but for China as well," noted Thomas Rieth, manager of the ContiTech plant in Dannenberg, Germany.

He made his remarks at the awards ceremony during the Hannover Messe. SO.F.TER contributed to the ContiTech booth there as part of the special Value-added Partners (WeP) presentation. SO.F.TER received the honor for the second time, coming out on top of a field of 170 suppliers. Already in 2012, the company was singled out for its high degree of reliability.

SO.F.TER supplies axle-boot production at the ContiTech plants in Dannenberg, Germany, and Changshu, China, with granulate developed in collaboration with ContiTech.