Competence and know-how in the field of process engineering 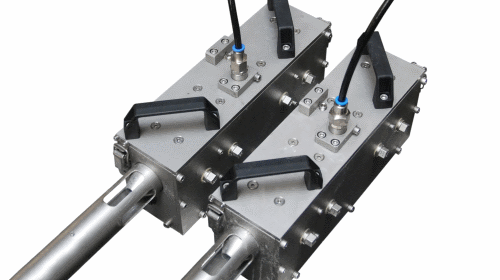 A glimpse at the newly developed coating device © mycon GmbH

At the end of 2014, mycon GmbH from Bielefeld implemented and commissioned the first coating device that it developed itself for a large industrial company in Ostwestfalen-Lippe (OWL). The entire process was developed and the device was built by mycon GmbH. Development expertise and experiences in the coating technology were incorporated into the device.

mycon is known as a manufacturer of cleaning systems, which works with dry ice, a minimal amount of water or various blasting abrasives. The customer's inquiry led to the development of an innovative coating system that is above all suitable for coating and painting longer parts, e.g., wires, belts, tubes, rods or profiles.

Development and construction from a single source

mycon has actively been working on the development of this coating device for several years and has continually driven its development during this period. The industrial client in OWL originally approached mycon, because the company itself had developed a new corrosion inhibitor that was, however, not sprayable. They required a conveyor system that would provide throughput speeds of up to 80 m per minute. The operating costs should be far below the costs of conventional devices.

The idea for the project was first implemented by mycon with a simple prototype, which the client purchased to carry out initial attempts and to test over a period of time. The tests were so successful that the customer commissioned mycon with the overall contract for the initial and further development of the device.

The total contract included expanding the device with several lines that could coat simultaneously. mycon developed and built the coating heads, the technical connections in the manufacturing plant, supply tanks for the medium, the temperature control of the medium as well as the entire installation and implementation on site. The client successfully put the plant into operation in January 2015.

The company was able to expand its knowledge in the field of coating and process engineering within the the framework of this project as well as conduct intensive research on processes and on the subject itself. mycon has already begun working on ways to advance processes for even higher throughput speeds. An additional undertaking is the ability to process all corrosion protection coatings, paints and varnishes without exception. The new plant should soon be made available for the market.