Topic of the Month December 2008 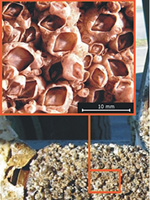 The offshore industry is expanding worldwide, and its economic importance for the oil and gas production and for the exploitation of wind energy is increasing. Tubes and wires are key components to enable the reliable operation of offshore installations and make them more efficient.

Within this demanding field of application, the materials must meet an extremely complex set of requirements. Extremely corrosive media, high and varying loads as well as fouling by algae and seashells are only a few of the issues that offshore components must deal with in a reliable manner.

Cables as thick as an arm

Cables are a key functional element in offshore applications – as static cables they serve to brace and anchor platforms, and as moving cables they are used for conveying and installation work. In deep-sea offshore production facilities, the cables must be oversized with increasing water depth due to their own weight.

The result are cables as thick as an arm that need to provide a breaking strength of up to 1800 tons. But how can such superior and nearly unique components made of high-tensile steel wire be tested with respect to their mechanical properties and predicted life?

This question is addressed by the Institute of Mechanical Handling and Logistics of the University of Stuttgart, Germany, in cooperation with the Acergy Group, a partner from the offshore industry. In their studies, the engineers focused on the examination of cables that are used in the area of A&R (Abandonment and Recovery) of pipelines and in the installation of infrastructures on the sea floor.

This includes e.g. operations such as the laying and recovery of pipelines at depths of up to 3.000 meters as well as complex underwater installation processes. Since the individual wires and the braids that are formed with them are subjected to high mechanical stress in the cable with respect to tension, transverse loads, bending, torsion and local pressure, it is not yet possible to reliably determine the life of such cables with analytical methods.

For this reason, a fatigue bending machine was constructed for the research project in cooperation with a Norwegian industry partner. This machine, which is a unique construction worldwide, can provide the necessary loading for such cables.

The results of the fatigue bending tests are complemented by additional material tests – such as magnetic induction characterization and tensile tests – and ultimately imported into a Rope Monitoring System (RMS). This database can be used on ships and platforms to monitor the cables on site and during operations.

The term fouling or biofouling designates the undesired overgrowth of the submerged parts of platforms, cables, hulls or buoys with barnacles, seashells and other organisms. This organic growth causes serious disadvantages especially in offshore applications: It disables sensor and monitoring systems used for inspection and control, increases the flow resistance and fuel consumption of ships and increases the risk of injuries during installation operations.

Up to now, fouling was mostly frequently suppressed with highly toxic paints containing heavy metals – e.g. on the basis of the chemical substance tributyltin (TBT), the use of which is no longer permitted.

For this reason, people around the world are looking for new, effective and above all environmentally compatible antifouling concepts. Researchers from the team of Prof. Dr. Antonia Kesel from the University of Bremen have recently developed a bionic approach to create marketable antifouling surfaces, patent pending. A licensee has also been found already.

The starting point for this innovation was the observation, that the skin of cat sharks does not exhibit fouling, contrary to that of many other sea creatures. Within the context of an interdisciplinary project team, consisting of biologist, material scientists, physicists, mechanical engineers and fluid mechanics engineer, the researchers succeeded in explaining the functional mechanism and the responsible structural effect of the shark’s skin and to reproduce it on various surfaces as a usable technology.

Initial tests under realistic conditions in the North Sea and in the Mediterranean Sea have also yielded positive results. The hull-mounted test panels exhibited 70 per cent less fouling. The antifouling effect that has been achieved using the development from Bremen is exclusively based on the physical properties of the material and does not require the use of any chemicals, and it can be applied as easily as any paint.

The development provides high transfer potential to many industries; after all, pipe systems in the food and paper industry are affected by fouling in the same manner as heat exchangers and industrial refrigerating plants.