Topic of the month October 2009 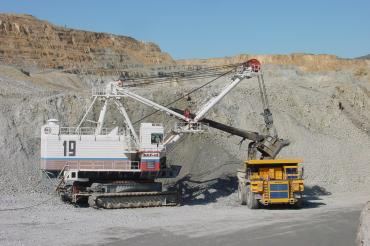 While everybody’s still talking about energy security, sufficient supply of our industry with metal commodities has hardly ever been a topic. And yet, they just as well form the industrial basis for the creation of value in modern economies. Also, Germany and Western states heavily depend on the import of metal commodities. Metals are ubiquitous in key industries like the automotive industry or machine building. The German metal industry alone employs more than a million people.

This is not to say that Germany does not have its own natural deposits of metal resources. For economic reasons, however, mining of metal ores in Germany and elsewhere in Europe has been abandoned in the early 1990s. At this time, metal commodities were cheap and easily available on the world market. This is why German enterprises like ThyssenKrupp and Volkswagen also gave up their mining projects abroad. The only significant domestic source today is the recycling of scrap metal which accounts for about half of the industry’s needs, according to the Umbrella Organization of German Industry (BDI).

While German import dependency has not been an issue for a long time due to low world market prices, things have fundamentally changed since 2003. According to the Federal Institute for Geosciences and Natural Resources (BGR) prices for metal commodities in 2008 have been fourtimes higher on average than 2003. At the same time, German import expenditures for metal commodities and goods have risen by 64 percent to € 20 billion while the imported quantity has only grown by 25 percent. The main cause behind this has been the rapid growth of China’s economy which made China the world’s leading import nation of metal commodities. “China bought out the market”, says an expert of the BGR. Adding to the problem, also Western industrial countries increased their demand for raw materials.

The global economic crisis has temporarily caused metal commodity prices to decrease. However, it seems unlikely that low prices are here to stay. It is true that mining companies all over the world have significantly increased their production capacities and invested five times more in exploration in 2007 than in 2003, so that the supply will further increase in the forthcoming years. On the other hand, there is a constant and growing demand of countries like China and other developing countries like India, Brazil and Russia. Already in the first half of 2009, the world market price for copper increased by more than 50 percent.
For some metals demand will also grow decisively due to their increased use in high-tech products, e.g. lithium since lithium batteries are being used in laptops, mobiles and electric vehicles.

Meanwhile, the global steel industry is increasingly worried. Steel is economically important as a pre-product for major sectors such as the automotive industry. Though iron ore as the base material for the steel production is geologically abundant, only three mining companies practically share the world market: the so-called “Big Three”, the Brazilian Companhia Vale do Rio Doce, the British-Australian Rio Tinto and the Australian BHP Billiton control more than 70 percent of the global trade with iron ore. In the years 2001-2008 the world has seen iron ore prices rising by the factor five, reaching an all time high. The Big Three can easily benefit from their market share since there is no real world market in iron ore. Instead, prices are being negotiated bilaterally on an annual basis between the producers and their buyers, that is, the steel industry. Thus, also in 2009 the mining companies only offered to lower prices by 33 percent while steel companies were hoping for 45-50 percent in order to cope with the global collapse of steel demand.

Adding to the problem, the current oligopoly could soon form a duopoly. Rio Tinto and BHP Billiton in June 2009 announced they will form a joint venture encompassing their Australian iron ore production in 2010. Thus, as soon as world demand for steel will recover, so will the prices for iron ore.