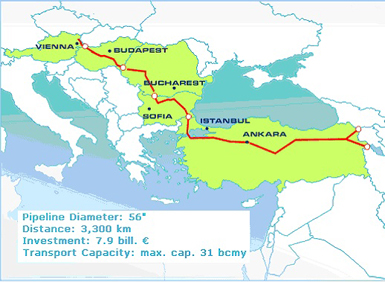 Picture: The planned itinerary from Baumgarten, Austria, to the Turkish borders to Georgia and Iran
Copyright: Nabucco Pipeline Company

In order to cover Europe's growing demand for gas, its import infrastructure needs to be considerably expanded in the forthcoming years. Aside from liquified natural gas (LNG) terminals new pipelines are being planned to fill the gap. One of them dubbed Nabucco is supposed to deliver gas from the Caspian Region and the Middle East to Europe. In March, the European Union (EU) has decided to fund the project.

The opera “Nabucco” by Guiseppe Verdi deals with the quest for freedom of Hebrew slaves oppressed by Nabucco, a Babylonian king, better known to the English world as Nebuchadnezzar. Not utter freedom, but less dependency on just a few supplying countries is the purpose of the pipeline of the same name. At the Spring Summit on March 20, 2009 EU Heads of State or Government agreed to fund the project with 200 million euro.

Representatives of the European energy industry welcomed the decision. A spokesman of the German Bundesverband der Energie- und Wasserwirtschaft (BDEW): “We need diversification of supply countries and routes. The Nabucco Pipeline would significantly enhance Europe's security of supply, as would other pipeline projects.”

At present, EU Member States receive 84 per cent of their gas imports from only three countries, namely Russia, Norway, and Algeria. This share is likely to grow in forthcoming years. While gas consumption in Europe has more than doubled in the last two decades, domestic gas production is on the decline. However, especially when it comes to power generation gas can hardly be replaced for the time being and will soon displace nuclear power as the second most important power source after coal, says the International Energy Agency (IEA).

As a result experts already caution against potential supply shortages if present import capacities of 310 billion cubic metres were not to be improved accordingly. A significant contribution could be made by Nabucco, says the European Commission. It is meant to deliver gas from the Caspian Region and the Middle East via Turkey, Bulgaria, Romania and Hungary to the Austrian gas turntable located in Baumgarten. It would be the fourth gas supply corridor to Europe.

Picture: Incoming gas goes through a purification process to remove solid and liquid impurities. This is performed by so-called “filter separators.“ Afterwards the gas is subject to quality controls.
Copyright: Nabucco Pipeline Company

For planning and setting up the project, five companies from the respective transit countries have founded the Nabucco Pipeline Company in 2004: OMV (Austria), MOL (Hungary), Transgaz (Romania), BEH (Bulgaria), and Botas (Turkey). Since the German energy supplier RWE AG has joined in February 2008, each member of the consortium holds an equal share of 16,67 per cent. The British company Penspen Limited has been awarded the Owner’s Engineer contract and is currently conducting the detailed engineering.

As is known so far, the pipeline of approximately 3,300 kilometres' length is to be build from 2011 to 2015. First gas could be flowing as soon as 2014. At the initial stage Nabucco is to transport eight billion cubic metres gas annually coming from Azerbaijan and Egypt. In a second step, the pipeline's capacity is to be increased up to 31 billion cubic metres. Additional supplies could come from Turkmenistan, Iraq, and possibly Iran.

However, numerous problems remain. Despite the EU contribution, the vast investments needed for building Nabucco are not yet secured. 70 per cent of the money is supposed to come from investors, the rest is meant to be financed by the shareholders of the Nabucco Pipeline Company. Estimated costs have almost doubled from 4,4 to 7,9 billion euro. Still, the project is not at risk, says Christian Dolezal, spokesman of the Nabucco Pipeline Company. “The European Bank for Reconstruction and Development and the European Investment Bank want to provide funding, so do export credit agencies and other big international financial institutions. The exact amounts are still to be negotiated.”

Uncertainty also exists over the question, whether there will be enough gas available to fill Nabucco. However, “the Turkmen Yolatoan gas field alone would suffice to fill three Nabucco pipelines”, says Dolezal. The demand at least seems certain, according to RWE spokesman Michael Rosen. “A non-binding market survey last summer has shown that Nabucco at the final stage will be 100 per cent overbooked.”

The final decision whether Nabucco will be built or not is due next year. Before, important steps have to be taken: an Intergovernmental Agreement between the transit countries and the so-called Open Season Procedure whereby transport capacities will be bindingly awarded. Since the Nabucco shareholder claim half of the pipeline's capacity for themselves, they also need an exemption from EU law by the European Commission. All the more, the EU decision to fund the project might prove a happy omen, says Nabucco spokesman Dolezal. “Especially at this stage just before the final investment decision this kind of support is significant.”