Topic of the Month September 2010 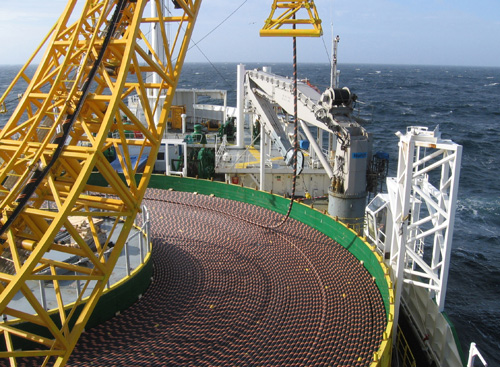 Picture 1: Construction of an HVDC sea cable within the scope of the NorNed-Project. The cable is passed on the sea bottom of the North Sea, it connects the Norwegian and the Dutch power grids. (Photo: ABB)

According to the Mediterranean Solar Plan of the European Union up to 20 Gigawatt (GW) solar electricity should be produced in the Sahara and parts of it transported to Europe in 2020. Since July 2010 the so far open question of transport is addressed by the German-French consortium Transgreen.

The European Union wants to reduce energy consumption and the emission of greenhouse gases in all 27 member states by 20% each till 2020. At the same time, the share of renewable energies in total energy consumption should be raised to 20% (so-called “20-20-20-strategy”). For this purpose solar energy plays an important role. Already in 2008 Brussels launched the Mediterranean Solar Plan (MSP). Its objective is to produce 20 GW of renewable energies in the Mediterranean area in 2020 and transport up to a quarter of it to Europe. Since most of the energy is to be generated by solar power the Sahara looks like the predestined production location. According to a study of the European Solar Thermal Electricity Association (ESTELA) only 0.4% of the total surface of the Sahara would be sufficient to meet the total European demand for electricity using solar energy.

Last year the commercial DESERTEC Industrial Initiative (DII) GmbH was founded, which encompasses inter alia German companies Siemens and E.ON, Italian and Spanish energy suppliers and network operators. According to press spokesman Alexander Mohanty the DII wants to meet up to 15% of the total European power supply with energy from the desert by 2050. While the production of solar electricity seems to make progress, the question of transport has been neglected so far. From a pure technical perspective transport is not a problem, says Ulrich Reininghaus, press spokesman for electricity grids at the electrical engineering company ABB Ltd., which is part of DII as well: “The technology we need is available. The problem is to actually build the system, that is, to make the political decision for it.” Here Transgreen comes into play. The consortium, which was founded on July 5, 2010, is lead by the French electricity group EDF and combines inter alia Siemens as well as the French cable manufacturer Nexans.

Picture 2: Solar thermal electricity seems to be the most suitable technology for the purpose of generating electricity in the Sahara. At present Parabolic Trough Plants are most common. The photo shows such a power plant in the Mojave desert. (Siemens-Press picture)

Part of the question of transport is the choice of the appropriate voltage and cables. Inside Europe current is mainly being transported in form of three-phase alternating current. Advantages are the simple regulation of voltage and frequency as well as the possibility to branch off large amounts of current easily. Disadvantages of alternating current are high transmission losses at long distances. The transmission losses of an 380 kilovolt (kV) alternating current line are approximately 15% at 1,000 km distance. The losses of sea cable lines are even higher: 60% of the transported amount of current gets lost if a 100 km 750 kV sea cable is used. That is why only High Voltage Direct Current (HVDC) is worth considering for the transport of solar electricity from Africa to Europe. The transmission losses of a submarine HVDC line with a length of 1,000 km are between three and four per cent. The problem is the increase or reduction of voltage and therewith the adaption to local electricity networks. Therefore, HVDC lines are only suitable for long distance transports. To some extent they are current highways, which have to be complemented by a conventional alternating current electricity grid. So far there is only one large connection between Europe and Africa: a 400 kV alternating current line in the Strait of Gibraltar, which transports up to 1,400 megawatt, mainly form Spain to Morocco. The successful implementation of the Mediterranean Solar Plan therefore requires several new trans-Mediterranean current lines. If it should be possible to transport 5 GW solar electricity to Europe in 2020, at least six current lines with a capacity of 1 GW each have to be build, says Nexans spokeswoman Celine Revillon. The estimated investment costs are high: For 1,000 km sea cable HVDC line (600-800 kV) between 1.8 and 2.5 billion Euro (the data vary slightly) have to be invested. In addition there are judicial uncertainty factors, explains Ulrich Reininghaus: “If one cable crosses another – whether current or television line – you have to buy licences.”

Transgreen is going to carry out feasibility studies during the next three years. Correspondingly the consortium only provides two to three million Euro so far – a quite modest budget. Nevertheless, Transgreen is being welcomed by companies as well as environmental associations. The Desertec Industrial Initiative appreciates the initiative: “The topic of Transgreen complements well with problems that the DII deals with”, explains press spokesman Mohanty. Greenpeace Germany also appreciates Transgreen and raises only minor concerns over the installation of sea cables, says Andree Böhling: “The cables have been used in many cases and they are necessary for the reorganisation of the power supply in direction of renewable energies. However, ecological criteria and minimum standards concerning the track of the lines have to be observed.”

Nevertheless, it is a long way to the start of construction works. So far, the absorption of investment costs and the granting of licences as well as feed-in regulations are unsettled. Especially feed-in regulations guarantee safe investments and therefore the funding of solar power plants and the current lines. The feasibility studies should achieve first results in 2013 at the latest. Then it will be shown whether it is a realistic aim, that in 2020 5 GW solar electricity should be transported from the Sahara to Europe. At any rate, the EU would be one step closer to its 20-20-20-objective.