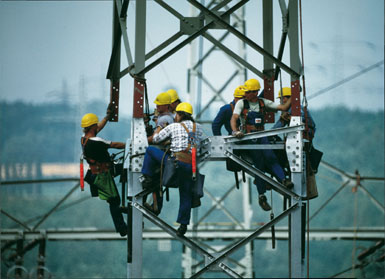 The reliable transport of electricity according to customers’ needs is crucial for a state’s security of energy supplies. In Germany, to provide sufficient transmission system capacities according to the amount of power to be transferred is the task of the transmission system operators (TSO) which experts say have been doing a good job so far. According to the Federal Ministry of Economics and Technology the German power grid is the most stable in Europe with an average of 21 minutes down time per year. However, as the amount of electricity to be transported is steadily increasing, some sections of the national grid are at already at their limits. Occasionally, wind power plants even have even to be switched off in order to avoid overload.

Due to the massive expansion of wind power in Northern Germany and the building of new conventional power plants close to the sea in forthcoming years more and more electricity has to be transmitted from the north to the south. Adding to the problem, with electricity market liberalisation in Europe cross-border power trading is increasing as well. Thus, experts agree that the expansion of Germany’s transmission system is overdue. The German Energy Agency (dena) estimates that some 850 kilometres of extra high voltage lines (220 and 380 kilovolt) will have to be built in the forthcoming years – about 2,4 per cent of the overall transmission grid.

Yet, the way in which the expansion is to be done is a controversial issue. Technologically speaking, there are two options, namely traditional overhead lines with their significant electrical towers and the technologically more advanced underground cables.
Since power lines are under high electrical voltage they have to be insulated from the environment. The insulating medium is a considerable expense factor. With overhead lines, the medium used for insulation is the air. Only where the lines are attached to the electrical tower mechanical isolators such as plastic, glass or china are being used. In contrast, with underground cables the voltage has to be reduced on just a few centimetres’ way. The material usually used for this is polyethylene (PE).

While underground cabling is already quite common in the low and medium voltage range (380 – 20.000 volt), it is the exception in the extra high voltage range. According to the European Confederation of National Associations of Manufacturers of Insulated Wire and Cable, Europacable, less than 3.000 kilometres of extra high voltage underground cable are being used throughout Europe.

In theory, the four German regional TSO E.ON, RWE, EnBW and Vattenfall Europe are free to decide which technology they prefer. So far, they have mostly decided in favour of overhead lines since these require lower investment costs. “We estimate that underground cabling would be four to ten times more expensive than overhead lines, depending on local parameters,” says a spokesman of the German Bundesverband der Energie- und Wasserwirtschaft (BDEW) who is also representing the TSO. However, they are facing increasing resistance in the population. In several places where new overhead lines are to be built citizens’ initiatives try to prevent new electrical towers in their backyard.
The protests prolong the planning and approval process for overhead lines which takes about eight to ten years.

Partial underground cabling could help to overcome public resistance and thus accelerate the grid expansion, says Matthias Kirchner, spokesman of Europacable Germany. He does not deny that underground cables are more expensive than overhead lines. However, “if you consider not only manufacturing and excavation costs, but also maintenance costs, electricity losses and down time costs plus the shortened approval times, extra high voltage underground cables are only two to five times more expensive than overhead lines, depending on local conditions”, says Kirchner. A major factor is the ground material as excavation costs account for 40-50 per cent of the overall costs. Thus, for example, underground cabling in rural areas is much cheaper than in a mountainous environment.

Now the Federal Government has taken a step to solve the conflict. In May, the Parliament has passed a bill in order to accelerate the planning and approval process for 24 priority projects. Amongst others, the bill foresees four transmission routes on which the TSO can apply for underground cabling and refinance the additional costs via the electricity consumer prices. Citizens hope that now the TSO can neglect the financial argument they will at least opt for a partial underground cabling of the transmission system.

- If wires and interfaces are too big and too expensive
- New pipeline to deliver gas from the Caspian Region to Europe
- Intelligent composites: Plastic metal hybrids