Topic of the month February 2013

The European auto industry finds itself in the deepest crisis for twenty years. According to the industry association, ACEA, last year, 2012, the number of new motor vehicle registrations fell in the EU by eight per cent compared to the previous year thus making it the fifth consecutive year. The last growth had been in 2007. With twelve million new cars, just as few cars were sold in 2012 in the EU as was previously the case in 1995. The slump was particularly marked in December: compared to the same month the previous year 16 per cent less cars were sold.

The global trend is in stark contrast to the lull on the European market: worldwide the automobile industry has been a growth market for years. 2012 was the third record-breaking year in succession with almost 80 million vehicles sold worldwide. Growth-driver Number One is - who else could it possibly be - China.

“China has advanced to the largest vehicle market in the world and will continue to grow”, Daimler Boss Dieter Zetsche recently predicted in the Handelsblatt. Because the need to catch up in the threshold countries is still enormous, the degree of motorization is still comparatively low. But not only China is booming - in the USA too the car manufacturers’ sales figures rose in 2012. 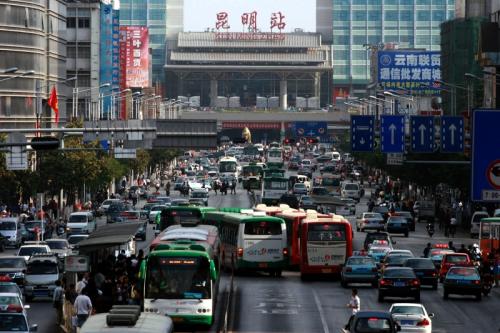 An increasing number of cars are finding their way onto the roads of Chinese cities such as Kunming. Photo: Jialiang Gao


The European auto market is however weakening just like the entire economy, with vehicle sales closely linked to its trade performance. There was a particularly sharp fall in car sales in 2012 in Italy, France and Spain. In those countries up to twenty per cent fewer cars were sold than the previous year – not that surprising given the double-digit rates of unemployment in some cases.

In Germany, in contrast, the manufacturers registered only slight declines, however here, too, they had to really work hard to win over the customers with numerous discount promotions. According to the ACEA, Great Britain was the only EU nation to even register increases in car sales. The losses and declines are extremely unevenly distributed not only in the EU countries, but also among the manufacturers.

Hardest hit by the sales crisis were the mass producers such as France’s PSA, parent company of Peugeot and Citroen, Renault, Opel, Ford and Fiat. Ford has already closed one plant in Belgium, while Opel has announced the closure of its Bochum plant for 2016. The closure of a PSA plant near Paris was only provisionally averted through the intervention of the French government and a multi-billion bailout.

In contrast, the so-called premium suppliers are much less affected by the European sales crisis. Although their sales within the EU also declined slightly, BMW, Daimler & Co hold a powerful position on the world market – and are thus benefitting from the growth of the automobile industry especially in China and the USA. In those countries demand for German cars is greater than ever before and this helped the manufacturers to achieve record sales in 2012. BMW, Daimler and VW sold more cars worldwide than ever before. The top performer was VW, who for the first time broke the nine-million vehicles sold barrier.


Key supplying industries such as the steel tube sector are also benefiting from the strong market position of the premium manufacturers. “The strong position of the German premium suppliers on the world market is currently still mostly compensating for the weakness of the overall market in Europe”, says Frank Harms, Managing Director, German Steel Tube Association (Wirtschaftsvereinigung (WV) Stahlrohre).

According to WV Stahlrohre, in Germany the automobile industry and its suppliers account for around 15 per cent of demand for steel tube products. A large part of this is seamless and welded precision steel tubes. These are fitted for example as cross and side-members, door reinforcement tubes in the vehicle body, as stabilisers and shock absorber tubes in the chassis or as crankshaft and camshaft tubes as well as diesel injection tubes in the powertrain section.

They can also be found in the interior as airbag tubes, in the seats or as instrument panel and dashboard supports. The German Electrical and Electronic Manufacturers’ Association (Zentralverband Elektrotechnik- und Elektronikindustrie -ZVEI) is also reporting only slight declines for 2012 in the motor vehicle electronics sector.

But what if even VW & Co begin to wobble? After all, according to most experts, the prospects for the European auto market are everything but rosy even as far as 2013 is concerned. “With the car sales trend continuing downwards”, says Harms, “the current overall still good to very good capacity utilization in the steel tube industry will decline.” There is however reason to assume that the global automobile industry will continue to grow in 2013, and German manufacturers will be able to compensate for the stagnation on the European market in other areas.

“In Europe the trend will continue downwards this year. Thanks to the sales increases, particularly in China and the USA, the German manufacturers are however expected to withstand the crisis without too much damage, and continue to win market share overall,” states the Handelsblatt quoting an expert from economic consultants Ernst & Young. Frank Harms too sees no reason for doom and gloom for his industry: “We expect to continue to benefit from the stable position of the German manufacturers especially on the export markets.”


Find in our upcoming topic: