African governments and international benefactors invest on a massive scale in the electrification of the continent.

In many African states, energy is a scarce resource. It is estimated that fewer than 40% of the inhabitants of the continent have regular access to electricity. The energy supply south of the Sahara is particularly poor. According to UNESCO, this is the only region on earth where the absolute number of people without access to electricity is even rising.

According to Elham Mahmood Ahmed Ibrahim, Commissioner for Infrastructure and Energy of the African Union (AU), approximately 70% of the people here need to cope without electricity. Moreover, the supply rate in only nine African countries was above 50%. Even now, scarce and expensive energy, alongside the poor traffic and transport infrastructure, is considered to be one of the biggest obstacles to growth for the African economy.

And the continent's energy demand will continue to rise, with experts anticipating that electricity requirements will increase by approximately 6% annually from around 600 terawatt hours in 2010 to more than 3,000 terawatt hours in 2040. This approximately corresponds to an increase of the annual German electricity consumption to the level of China. 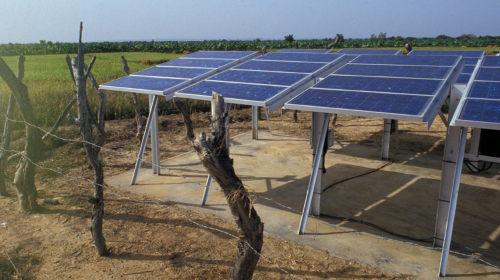 In order to even come close to covering these requirements, a significant expansion of power production capacities is essential. These capacities would need to rise from the currently installed 125 gigawatts to an estimated level of approximately 700 gigawatts in 2040.

Numerous African countries are aware of the problem and are already investing huge amounts in expanding their energy sector or at least want to start doing so in the near future.

"Each year, Africa's governments invest a total of up to EUR 40 billion in their energy supply," says Stefan Liebing, Chairman of the Afrika-Verein der deutschen Wirtschaft [Africa Association of the German Economy], which represents more than 600 German companies operating in Africa.

In the process, they focus on renewable energy. In Kenya, for example, several geothermal power plants and the largest wind farm in Africa are under construction, while numerous other power plants are being planned. The government is pursuing an ambitious objective: It aims to create more than 20 gigawatts of additional energy production capacities by 2030. 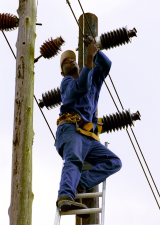 However, such ambitious state energy expansion programmes first need to be financed. The costs involved are huge: The International Energy Agency estimates that more than USD 300 billion would be required in order to provide people in the sub-Saharan states with universal access to electricity.

It is clear that the governments do not have the financial resources to accomplish this on their own. Luckily, they can count on the support of international benefactors.

A considerable amount of this is intended to be used for improving the energy supply. The AU estimates that with the aid of the programme, electricity production costs in Africa as a whole could be reduced by USD 30 billion per year. The proportion of people who have sufficient access to electricity supply is to rise from the current level of approximately 40% to 70% in 2040. In absolute figures, this means that an additional 800 million people would then have access to electricity. 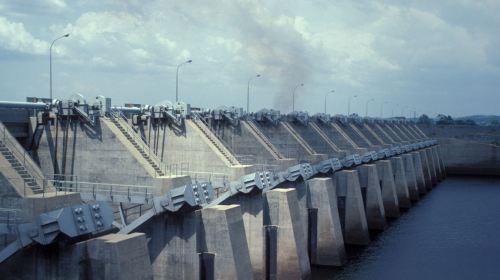 This objective is to be achieved mainly by means of the expansion of water power which experts in Africa consider to have large potential. Already today, approximately one third of energy in Africa comes from water power. However, according to UNESCO's World Water Development Report 2014 only a fraction of the potential has been harnessed so far.

In contrast, many people are still reliant on energy from unprocessed biomass such as wood, the combustion of which is harmful to health and the environment. The projects sponsored by the AU and the African Development Bank also include a huge hydroelectric dam, which is being constructed in the Democratic Republic of Congo and is to produce up to 40 gigawatts of electricity after its completion.

It would thus become the world's largest hydroelectric power plant. Since 2014, this mammoth project - on which construction is set to begin in 2015 - has also received sponsorship from the World Bank.

African governments are receiving further support from the USA. In the summer of 2013, President Barack Obama launched the "Power Africa" initiative. The US government is initially supporting six African partner countries in the expansion of their energy production and transmission networks, these being Ethiopia, Ghana, Kenya, Liberia, Nigeria and Tanzania.

Ten gigawatts of new production capacities are to be created here in the next five years, with at least 20 million additional households and businesses receiving access to electricity. For this, the USA is providing more than USD 7 billion in financial assistance by 2018, in addition to technical support.

Private US investors such as the energy group General Electric have pledged additional billions. The first sponsored projects under the new programme were launched in 2014, including wind farms in Kenya and Tanzania as well as a solar power plant, also in Tanzania.

The combined efforts of African states and international benefactors provide hope that thanks to broad international support, the creation of an extensive energy supply in Africa that states could not accomplish alone can finally be achieved in the next few decades: A far-reaching electrification of Africa.