China’s economy has recently displayed unusual weaknesses. The International Monetary Fund (IMF) assumes the world’s second largest economy will “only” grow by 8.2% in 2012. While European states can only dream of figures like this, other emerging threshold countries like India and Brazil are posting considerably lower estimated growth levels of 6.9% or 3.0% in 2012. Yet compared to China’s 10.4% growth in 2010 and still 9.2% last year, just under 8% almost sounds like a crisis. Even in 2009 when the global economic and financial crisis reached its lowest point Chinese growth still stood at 8.7%. 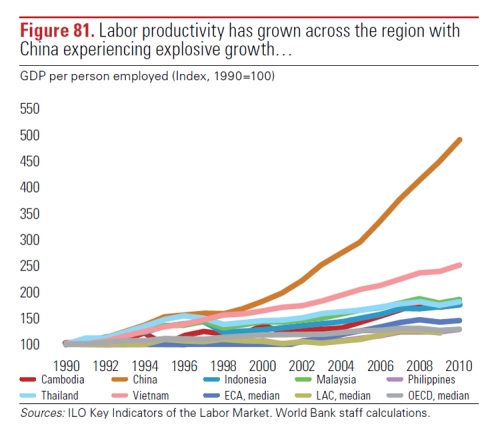 In the last decade productivity in China rose more strongly than in any other region of the world (Source: World Bank)


Over the past three decades the Chinese economy grew an average of 10% per year and 500 million people were lifted out of poverty. China has become the world’s largest producer and exporter and after more than 40 years in 2010 it surpassed Japan as the world’s second largest economy. However, a fair number of experts see far more than merely a temporary dent in growth in the comparatively gloomy prospects for this year.

In its report “China 2030” drawn up amongst others in collaboration with the Chinese Ministry of Finance the World Bank says the country is at a turning point and needs a new development strategy. The current growth model is not sustainable, said World Bank President Robert Zoellick when presenting the report in Beijing in February 2012.

One of the reasons for the current slump is, however, not to be found in China but in the crisis in the western industrial nations. As is the case throughout Asia, China is now feeling weakening demand from EU countries and the US – which are by far China’s most important trading partners, together accounting for just under 40% of Chinese exports.

However, this cannot hide the fact that Chinese exports have become considerably more expensive over the past few years. As the Economist reported in March 2012 (“The end of cheap China”), wages saw annual rises of 12% and 14% respectively between 2002 and 2009 in Guangdong and Shanghai, two of the country’s most important economic regions. The days when western companies shifted their production locations to the Far East solely on the basis of low wage costs therefore seem to be over. As the American Chamber of Commerce found in a recent survey, 91% of the US firms polled see rising wage costs as the greatest challenge at present. For this reason the World Bank sees a decisive turn from state capitalism, far-reaching market economy reforms and greater competition as indispensable if China wishes to avert a considerable flattening in its growth curve over the coming years and decades. 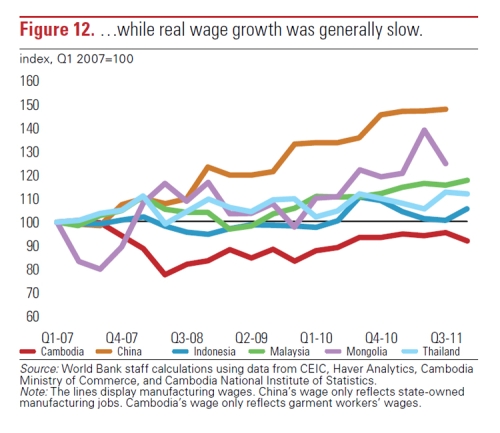 
Now more significant economic reforms in China cannot be expected initially. The end of 2012 will see regular changes at the head of the Communist Party which, as experience has shown, will be followed by a phase of market consolidation. During this phase conflicts with profiteers of the current economic system are not what you need. Nevertheless, in its World Economic Outlook from April 2012 the IMF does not see the competitiveness of Chinese products in danger in any sense since productivity has risen significantly alongside wages. Furthermore, higher salaries have strengthened purchasing power on the home market so that higher domestic consumption can counter the fall in exports, the report said.

In actual fact, reducing the Chinese economy’s dependence on exports and strengthening domestic demand are political objectives. The fall in exports already seen during the global economic and financial crisis in 2008/2009 taught the Chinese government that state investments and exports alone form an unstable basis for growth. Instead, the wish is to tap into China’s own powerful local market and make domestic consumption its No. 1 growth driver. Therefore, the five-year plan passed in 2011 foresees significant annual wage increases and a reduction in the difference between the poor rural and rich urban population. The middle classes are therefore to account for 40% of the population by 2020. To achieve this aim there is a willingness to accept slower economic growth of 5-7% per year.

However, experts already predict recovery and a rise of 8.6% for 2013. Meanwhile, even considerably slower growth would not jeopardise China’s economic development. According to a World Bank study, in future 6.6% growth per year would be enough for China to replace the USA as the world’s leading economy.