The German Steel Federation is once again represented in the German capital Berlin, having re-opened its office there about a year ago in order to intensify the exchange with the federal government and the parliament. Besides the active maintenance of contacts with parliamentarians and officials from the ministries, discussion rounds with members of the parliament’s economic and scientific affairs committees are also organised here. A continuous dialogue is maintained on the parliamentary group working level. This Berlin presence should serve to make the steel industry and its concerns more visible and help integrate it better into the political processes.

The Stahl-Zentrum supports its member companies through targeted marketing efforts as they compete on the national and international level, promotes further advancements in steel technology through expanded technical and scientific cooperation and provides information about current developments in the steel industry to customers.

The German Steel Federation represents the political and economic interests of the German steel industry. It can look back on more than 130 years of activity. Founded in 1874 as the “Association of German Iron and Steel Industrialists,” it became the “Economic Association of the Ironmaking Industry” in 1935 and then, in 1946, the “Iron and Steel Industry Federation” – the organisation that was renamed the “German Steel Federation” (WV Stahl) in 1988.

The organisation represents the sector-specific interests of almost all German steelmaking companies – as well as associated foreign member companies – in politics, in business and to the public. The primary goal of the German Steel Federation is the creation of a favourable political and economic environment as the basis for the success of its members.

The Stainless Steel Information Centre (ISER) supports the trend towards rust-free stainless steel by means of company-neutral and material-related publicity work for its members, who come from the fields of production, retail, processing, surface coating, the alloy materials industry and the publishing industry. Activities include the production of application-focused publications, delivery documentation and trade articles, as well as the organization of joint member company appearances at trade fairs, including leading global industry trade fairs such as BAU, IFAT Entsorga and ACHEMA 2012.

In addition the event “Stainless Steel Days” in Düsseldorf has established itself as an important and successful annual industry fixture. Organising and supporting such trade programmes serves to disseminate specialised industry know-how to metal workers, an important target group. Another focus of the work: making available experts from civil, plant and process engineering to answer application-specific inquiries and provide sourcing information. One example is the www.edelstahl-rostfrei.de website, which has been able to rank first as an information platform in search engine queries for stainless steel. 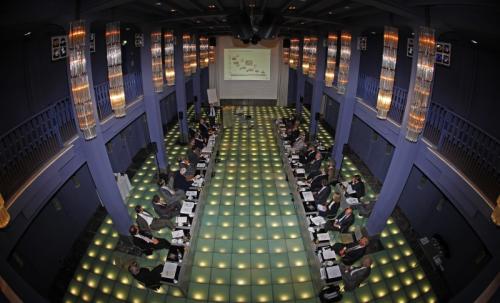 The Special Steel Association is a specialist subdivision within the German Steel Federation. It is a registered association with its own by-laws and board. It represents the interests of its member plants, i.e. special steel producers for rolled, forged and blanked materials; thus it includes manufactures in the initial stage as well as the processing stage of steel production. Its medium-sized enterprise structure can be attributed primarily to its members from the forging industry and the advanced processing sector.

The history of the Special Steel Association began when plants felt they needed to join forces in an association in order to promote the specific interests of special steel producers, at a time when demand for steel of ever-higher quality was increasing. The founding happened on 12 December 1914 under the name “Association of German Special Steel Plants.”

Enhanced dialogue with the public

The steel information centre Stahl-Informations-Zentrum is another joint organisation of steel producing and processing companies in Germany. Its most important tasks are providing technical information about the processing of steel, as well as market and image support for steel as an input material and its associated industry. The Stahl-Informations-Zentrum participates in trade fairs regularly and organises lecture events for varied target groups all across Germany in order to promote communication between steel processors and steel users.

In June of 2012 S-I-Z presented for the ninth time its Steel Innovation Prize, the Stahl-Innovationspreis. one of the most significant contests of its kind in Germany. A total of 658 projects were entered in four categories: “products made of steel,” “steel in research and development / processes,” “components and systems for construction made of steel” and “steel design.” 13 of them were awarded the prize.

13 projects received the award in front of an audience of 900. One of them received the special prize for the best entry under the heading of “climate protection with steel.” The next Steel Innovation Prize will be awarded in 2015.

Currently the energy and climate policy of Germany as an economic location is high on the public relations agenda. This topic hasn’t just been discussed in numerous interviews and press releases, but also in publicity-generating open air events.

The German Steel Federation organized a symbolic hurdles event (Picture X) in front of the German parliament in October of 2012. The theme was “The German steel industry can’t win this race.” What was behind it? The German steel industry is in an intensive international contest with countries such as China, Russia and the United States, countries that do not have comparable costs from renewable energy, but also no emissions trading and no energy tax.

The “High-Wire Act” event on 21 March 2013 (picture y) was resourcefully organized in parallel to the energy summit at the chancellery. A steel high wire was put up and an artist balanced on it wearing the typical uniform of a steel worker, all while having to bear the weight of “German energy costs” and “international competition” in the shape of an oversized dumbbell.

Welcome to the Team! Trainees turning into Colleagues

High-quality training in conjunction with subsequent career prospects is still seen as the success formula for tying skilled employees to a company.