Topic of the month October 2013

From 7 to 11 April 2014, Messe Düsseldorf will once again be the place to be as experts from around the world gather at the two No. 1 trade fairs Tube, International Trade Fair for Tube and Pipe, and wire, International Trade Fair for Wire and Cable. Some 2,500 exhibitors in 15 exhibition halls will present their innovations from the tube, wire and cable sectors – hence a trade fair visit is an absolute must for industry players large and small.

A look back: Tube 2012 exhibitors and visitors

More than 73,000 trade visitors from over 100 countries attended Tube 2012 and wire 2012 in Düsseldorf and gathered information on the innovations presented by 2,500 exhibitors from 58 countries. The latest technologies, machinery and products were showcased on a total net exhibition floor space of 105,800 square meters.

With 1,179 exhibiting companies, Tube once again broke its exhibitor record in 2012. That figure represents an eight-fold increase since 1988. A high 70% share of internationals was a welcome result. Market leaders from 50 countries wouldn’t miss the opportunity to showcase their expertise and products at Tube.

The trade fair for tubes and pipes recorded a big jump in visitor numbers, too. A total of 34,600 trade visitors represented an increase of 2,600. The share of internationals was pleasantly large here, as well, at 55%. Particularly high numbers of trade visitors arrived from Italy, France and India. Exhibitors were beyond satisfied with the high number of deals they closed at the trade fair and with the follow-up business. The exhibition area dedicated to tube trading and manufacturing has actually grown so much in recent years that it’s nearly at capacity. Tube 2014 will focus on input materials, tubes and pipes, accessories and machinery, as well as other innovative tube manufacturing technologies. The trade fair will also address the trade of tubes made from ferrous metals, non-ferrous metals, plastics, fibreglass, glass, ceramics and concrete. Other major topics include measurement and control technology and testing technology and equipment. Process engineering tools and auxiliary components will also feature prominently.

Taking place for the first time, the PTF, Plastic Tube Forum, will be dedicated entirely to plastic tubes and their many and multifaceted uses.

Plastic tubes are extremely durable and variable, and they can be used in limitless ways. Natural gas and drinking water supply systems, heating and plumbing systems, the chemical or pharmaceutical sectors, geochemistry or the automotive industry – everyone relies on plastic tubes.

Their high innovative potential, new and highly advanced plastics as well as production and process technology improvements make possible the development of application-specific solutions – something that’s of particular interest to the energy and environmental engineering sectors. The plan is for this Special Show in Hall 7.1 to become a fixture as an exclusive meeting point for materials manufacturers, tube manufacturers, tube traders, materials traders and users.

It goes without saying that Tube is a must-attend event for all companies in the tube and pipe sector. They will be a major contributor in 2014, as they are the ones supplying the trade fair with the latest insights and products. But the automotive industry, the chemical industry and the iron, steel and non-ferrous metals sectors will also be playing their part in providing Tube visitors with comprehensive information.

The international tube and pipe trade fair also aims to meet the expectation of the electrical, electronics, construction, trade, crafts and services sectors. Naturally, a strong contingent from the logistics and environmental sector, the onshore/offshore oil and gas industry, and the pipeline construction sector will also be attending. Furthermore, Tube 2014 will again be a platform for heat, oil and gas, and water utilities and for the measurement and control engineering sector.

The energy sector has long provided critical momentum for both the international and the German steel tubing industry. And this area continues to be the largest market for steel tubes and pipes: Just over half of all tubes and pipes produced are destined for the transport of oil or gas. 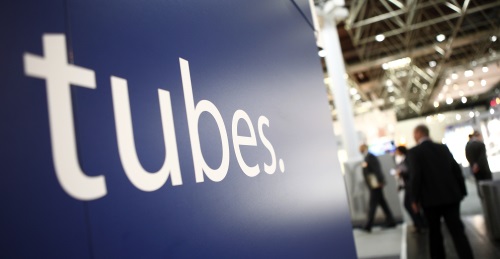 The economic environment, itself shaped by the sovereign debt crisis in several euro-zone states, decisively affected the business performance of German steel tube makers last year. While the year started in a promising way, the economic climate became increasingly challenging as the year went on. The economy cooled down – not just in Europe, but also in most regions outside of Europe. Besides the United States and Japan, this development also hit the larger emerging countries.

According to the Steel Tube Association, European manufacturers have approached 2013 cautiously due to continued economic uncertainty. There is hope that government intervention will mitigate the burdens imposed by the financial and sovereign debt crisis in Europe and the U.S. in the medium term. Beyond that, inventory-cycle effects along with an increase in market confidence could favour an increase in steel tube demand in Europa as the year progresses.

However, the association anticipates that global demand for oil and natural gas will continue to increase in coming years, which should lead to a corresponding rise in the demand for steel tubes and pipes. Acceleration in the extraction of so-called unconventional oil and gas reserves – meaning the highly controversial fracking – is seen as particularly stimulating in this area. Infrastructure improvements in emerging countries, particularly in China, should also lead to further increases in steel tube demand. Experts forecast an above-average increase in Chinese manufacturing due to strong domestic demand.

Against this background, three joint Chinese stands will be presenting their tube manufacturing and trading products and services as well as tube accessories in Hall 2. The same three organisers will also have a presence in Hall 6, the Machinery area.

Those who stay informed and establish and maintain contacts will be able to join in the success of these sectors. In times when growth happens mostly outside of Germany and Europe, a global presence is becoming more and more critical for German tube manufacturers, too. And the Tube 2014 trade fair will support both exhibitors and visitors in that regard.