Energy bundles in demand more than ever 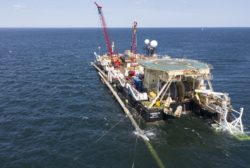 Two overlapping pipe ends of a pipe string have to be raised and cut on a pipelay ship before they can be welded together. Source © Nord Stream 2 / Axel Schmidt

You can’t see them when they’re doing their job — yet the spotlight is on them more than ever now. Pipeline projects, energy bundles laid underground or on the seabed, yet they are the stars with a constant presence in media headlines. An ever-growing trend. New pipelines such as the TurkStream, Nord Stream 2, EastMed and the Baltic Pipe Project are delighting energy providers and users alike, and their suppliers too. There is a huge thirst for piping — it must be quenched swiftly using the best quality products.

TurkStream joined the numerous existing pipelines in the Black Sea at the beginning of the year — it connects the Russian and Turkish gas transport system. One line supplies gas to Turkey and more gas through Turkey to south and south-east Europe. Together the pipelines supply 31.5 billion cubic metres — newsworthy in itself. The pipeline stars stand out on the red carpet, however, also because it is the first time, worldwide, that a pipe with a diameter of more than 810 mm has been laid as deep as 2,200 metres. More boundaries are shifting, however, as also pipe manufacturers are making monumental product developments.

Open construction
Nord Stream 2 is also showing off its innovation with two lines planned, that will run broadly parallel to the already laid Nord Stream pipe, running through the Baltic Sea. They should carry some 55 billion cubic metres of gas a year from Russia to Germany, where it will be further distributed throughout the European Union. “The rectilinear shore-based section was built using an innovative open construction method using trench coffers,” reported Nord Stream 2 AG. This procedure minimised the construction site, as the pipework was pulled through pre-prepared trenches and connected in the middle of the shore-based section.

The pipe supplier had to shoulder a mammoth task: Over 200,000 pipe segments were delivered. The total volume came to 2.2 million tonnes for a total stretch of 2,500 kilometres. Europipe — whose partner companies are Salzgitter Group and Dillinger Hüttenwerk AG — made 890,000 tonnes of this amount for around 1,100 kilometres.

Pipelines and environment protection
And there’s more in the pipeline: In January Gaz-System signed a contract with Europipe for the delivery of underwater pipes for the offshore segment of the Baltic Pipe Project. From October 2022, the scheduled pipeline should enable the import of more gas — up to 10 billion cubic metres — from the deposits on the Norwegian continental shelf to Poland.

“Europipe manufactures pipes with a nominal diameter of 900 mm, and a nominal length of 12.2 metres per section,” explain the project partners, Energinet and Gaz-System. The contract also includes pipes of the same diameter for the short, shore-based section from the gas main to the receiving terminal. It will also include all the protective coatings in the project, “that will protect the pipeline as well as minimise the effects on its surroundings and the environment.”

The steel wall thickness of the gas main will be between 20.6 mm and 23.8 mm. “The pipeline will be plated with a special 4.2 mm thick corrosion protection coating, which will protect the seabed during its operating life,” the project partners point out. The Baltic Sea pipeline will also be protected by a 60-110mm thick concrete coating.

Gas switch-over
Construction work on the 216-kilometre long remote gas pipeline Zeelink has officially begun in April 2019. The project also include the construction of a new gas pipeline from the Belgian-German border to Legden bei Ahaus (Northwest Rhine Westphalia, NRW). The gas main should guarantee the switch-over from L- to H-gas, i.e. from natural gas with a low calorific content to natural gas with a higher calorific content for millions of household, commercial and industry clients in NRW among other places. Background: The share of L-gas is dropping due to declining outputs in the Netherlands. The project company is a joint venture between Open Grid Europe (75 per cent) and Thyssengas (25 per cent). The commissioning is planned for March 2021.

The project brings Mannesmann Großrohr an order that includes around 215 km of gas piping with a diameter of 1,016 mm (DN 1,000). The pipes, coated with polyethylene, are about 18 metres long and weight up to 8 tonnes. The ca. 100,000 tonnes of hot wide strip as a raw material for the spiral seam-welded gas main come from Salzgitter Flachstahl. The 543 arches for the gas main were produced in the Group’s own pipe-bending plant, where long seam-welded main pipelines from raw materials from Salzgitter Mannesmann Grobblech were processed.

Speedy order processing
And the industry continues to step on the gas: Schedules for the Eastern Mediterranean Pipeline (EastMed) are taking shape. In January, Greece, Cyprus and Israel signed a deal to build the EastMed, that from 2025 should be carrying natural gas from the Leviathan field in the Mediterranean, via Cyprus and Crete to the Greek mainland. This, together with the Poseidon and IGB pipelines, that further transport natural gas on to Italy and other European regions. The plans show that the EastMed pipeline should be 1,900 km in length and have an annual capacity of 10 billion cubic metres.

There are numerous pipeline projects awaiting pipe suppliers. Investment is necessary for speedy order processing with the best possible quality. An example is Butting’s readiness. Up to now, the company has had a 12-metre hydro-forming press in which a corrosion-resistant Butting stainless steel pipe and a carbon-manganese steel pipe can be mechanically joined to form a BuBi® pipe. The company would like, in the long term, to double its monthly output of ca. 15 km of BuBi® pipe with average pipe dimensions. By building a new hall and making the accompanying adjustments to processes, production processes should be optimised and productivity increased.

In addition, working with a mechanical engineering company, a new 12-m hydro-forming press was planned and commissioned for production. Production of the first BuBi® pipes in the new production cycle should begin in the third quarter of 2020.

A win-win situation
Investment that pays off. As the increasing number of pipelines not only secures energy supply, but also provides for increased earnings at energy providers and pipe manufacturers, this is a win-win situation for all those involved. If the quality is right, nobody has to take a peek into the pipes... 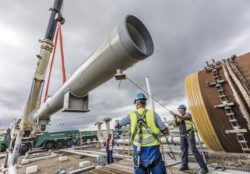