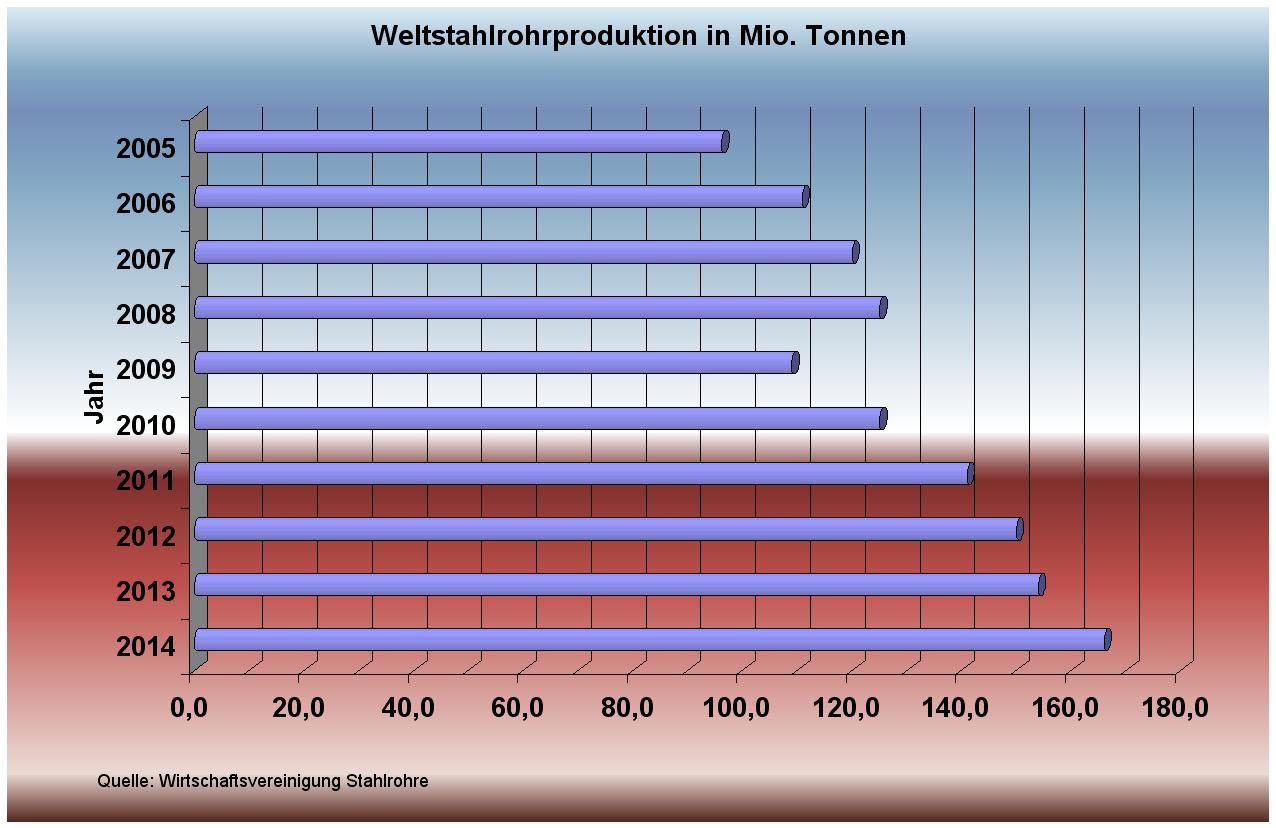 Steel tubes are still a success story. Except for a downturn in 2009, global production figures have been pointing in one direction only – upwards. According to the German Steel Tube Association (Wirtschaftsvereinigung Stahlrohre) in Düsseldorf, steel tube manufacturers increased their worldwide production by another 7 per cent in 2014, reaching a record 166m metric tonnes.

As in previous years, the rise was due, in particular, to higher production figures in China. In 2014 the People’s Republic achieved yet another above-average increase in steel production by 11.6 per cent, reaching 89m tonnes. In the same year 54 per cent – over half the world’s steel tubes – was produced in China. China is even more dominant in seamless hot-rolled steel tubes, where its share in global production has reached two thirds now.

In other parts of the world growth was four per cent – 77m tonnes – and thus considerably lower. In East Asia (excluding China) production remained more or less constant, at 2.2m tonnes. Japan recorded 7.2m tonnes and thus three-per-cent growth. The EU, too, experienced a slight production increase in 2014, after the previous year’s sharp downturn, though without achieving the record values of 2005-2008. Nevertheless, at 12.6m tonnes, European steel tube manufacturers are still producing four per cent more than in 2013.

German steel tube market is buoyant again
A four-per-cent production increase (2.7m tonnes) was also recorded by the German steel tube industry in 2014.  But of course 2013 had been one of the weakest years for a long time for Germany’s manufacturers. The industry is certainly still a long way off the record values of around 4m tonnes between 2006 and 2008. Neither did all industry segments benefit from the recovery alike. Gains were made, above all, by welded steel pipe manufacturers, while seamless steel producers suffered rather a decline. According to the Association, the poor results in this market segment were due to a substantial drop in crude oil prices, particularly during the second half.

The main reason for the rise in German production was an increase in domestic demand. Germany’s foreign trade surplus, on the other hand, experienced a decline, as exports dropped 12 per cent to 2.4m tonnes. At the same time imports went up five per cent, reaching 1.9m tonnes. This resulted in supplies for the German market rising to 2.2m tonnes, i.e. up 18 per cent.

In addition to this development in volumes, the development of prices was equally important to manufacturers. After a general decline in the previous year, 2014 displayed a variety of tendencies for different types of steel tubes. Whereas prices went up for large-diameter tubes, they went down for seamless tubes. For precision steel tubes, on the other hand, prices varied only negligibly.

Growth mainly outside Western Europe
According to Salzgitter AG, 2014 was marked by rising energy requirements in the BRIC countries, the development of the United States towards self-sufficiency in oil and gas and, at the same time, a decline in energy demand in the industrial nations, caused by improvements in efficiency. These developments meant that growth opportunities for the tube industry largely shifted to regions outside Western Europe. Moreover, partly due to overcapacities on the steel tube market in 2014, several markets also saw a toughening of competition.

In its 2014 annual report Salzgitter broke down global production into products and manufacturing processes. It shows that seamless tube production increased globally by just under six per cent, reaching 49m tonnes, of which 32m was produced in China alone. The production of welded steel tubes up to 406 mm (outer diameter) rose to 94m tonnes – a segment where the Chinese share reached 50 per cent for the first time. By contrast, large-diameter tube production (i.e. above 406 mm outer diameter) stagnated globally at 22m tonnes. Slight increases in the CIS, China and Japan were offset by a decline in production in the Western world. The downturn in large-diameter tubes was particularly noticeable in the United States – partly because US production had been at such a high level in 2013.

Benteler International AG is another company whose 2014 annual report focuses on the background of developments on the steel tube market. The company reports that the year was marked by positive stimuli from good developments in the global automotive industry, yet also by crisis-induced downward movements in Brazil and Russia. Furthermore, the company observed a decline in drilling activities caused by falling oil prices and, as a result, a lowering of demand for pipes in oil and gas exploration. The big regional differences in the use of steel tubes were reflected in growth rates of 3 to 5 per cent – and sometimes even higher – in Asia, Africa, the Middle East, Eastern Europe and Turkey, while the Western European market remained rather weak, with growth mainly below 2 per cent.

North America continues to be an important market
According to Benteler, positive signals came from the important OCTG market in the United States. Thanks to a considerable increase in oil exploration and production, the demand for tubes rose substantially from mid-2014 onwards. US anti-dumping measures against imports from various countries, particularly Asia, led to price increases in the second half of the year. Towards the end of the year, however, a major drop in oil prices began to cause a tangible reduction in demand.

In all, says André Sombecki, CEO at Benteler Steel/Tube, the steel tube market has basically developed very positively over the last few years: “The demand for tubes is rising, and the market is growing – especially in the United States and Asia. Europe recorded some slight growth and a high level of existing capacities. At the same time we can observe increasing competition from China, Russia and Eastern Europe.” The US market is seen as an important growth market, which is underlined by the new hot rolling mill in Shreveport, Louisiana. In this way Benteler not only seeks to demonstrate a close customer focus and a local approach, but it also wants to achieve a better long-term ability to serve markets in North and South America.

Statistics of the various customer industries of German steel tube manufacturers show that the energy sector is the biggest single area, with around 40 per cent. It is followed by the automotive industry (around 20 per cent) and mechanical engineering (15 per cent). Not surprisingly therefore, the energy sector is seen in the industry as the biggest growth engine and global market of the future. According to a forecast published by Benteler, the production of shale oil, for instance, is expected to have risen more than 100 per cent between 2012 and 2025. The production of liquid petroleum products and liquid gas is apparently set to increase 100 per cent in Latin America, 40 per cent in North America and 35 per cent in the Middle East.

Restrained development on the steel tube market in 2015
In 2015, however, the steel tube market did not confirm the correctness of such forecasts. In all, after the weakness of the first six months, this market continued to develop in a rather more restrained manner during the third quarter of 2015. This, at any rate, was the conclusion drawn by Salzgitter AG in its provisional report for January to September 2015. One major reason for the situation in the industry was apparently the crude oil prices which ultimately caved in again after a brief period of recovery. This led to weaknesses in exploration activities which are so important for the industry. The impact could be felt, above all, by seamless steel tube manufacturers which had to cope, for instance, with up to 40 production slumps in North America. However, substantial downturns were also recorded in the European Union, including Germany.

In all the other segments, by contrast, the economic performance was more positive. In welded steel tubes up to 406 mm (outer diameter) manufacturers achieved a slight increase in production output. Increases were also recorded for large-diameter pipelines (above 406 mm outer diameter), especially in North America, Russia and China. In the EU, on the other hand, production was only negligibly higher than the very low level of the previous year. German manufacturers benefited when the suspension of the Black Sea Pipeline Project, Part One, was lifted – the former South Stream Pipeline, now TurkStream. At the same time, the demand for precision steel tubes, says Salzgitter AG, continued to be satisfactory in the EU, including Germany, thanks to the automotive industry.

Yet, in all, the number of new and existing orders recorded by Salzgitter’s Energy Division – which handles its tube activities – was lower for the first three months of 2015 than for the same period a year earlier. As oil prices continued to be low, numerous gas and oil exploration projects were postponed or even abandoned throughout the world. Reduced demand coupled with newly created production capacities, particularly in Asia, led to greater price pressure and thus to a massive decline in revenue. This development also affected HFI and spiral-welded tubes, a segment which recorded a tangible downturn in existing and new orders in the first three quarters compared with the previous year. The precision tube market, on the other hand, benefited from a good order volume coming from Germany’s highly export-focused car manufacturers during the first nine months of 2015.

After the continuing weakness of Europe’s large-diameter pipeline market throughout much of 2015 a number of facilities in Germany did, however, experience an improvement in their employment situation at least. This was helped by the resumption of production for the Black Sea pipeline project, the order for the Trans-Adriatic Pipeline (TAP) and the ongoing positive situation in North America. The Salzgitter Group won the tender for 270 kilometres of large-diameter pipes and 1,559 pipe bends for the Trans-Adriatic Pipeline which will eventually transport natural gas from the Caspian Sea to Europe. In the future Salzgitter is expecting some robust and sustainable demand from car manufacturers in the precision tube segment. Due to low oil prices, however, the company is also anticipating results below the level of 2014 for seamless stainless steel tubes.

No crisis in the steel tube industry
“The steel industry is going through a global crisis which even the German steel industry won’t be able to avoid,” Hans Jürgen Kerkhoff warned in Düsseldorf in mid-December 2015. But the President of the German Steel Tube Association also admitted that the “weak economic figures in the steel industry are in contrast with the prospects of its big customer industries”. Apparently, a positive picture continues to emerge and inspire confidence – partly from performance indicators and thus a good mood in most customer industries, but partly also from the forecasts of the most important steel-processing companies. In the coming year growth is expected in the German automotive industry and also the construction industry. It seems that certain signs of stabilisation can now be observed in mechanical engineering and construction. Kerkhoff says further: “In the steel tube segments stimuli should mainly be coming from large-diameter pipes.” In total, production in the processing industry is expected to increase somewhat, while the need for steel will move slightly sideways.

The odds are therefore fairly good that 2016 will develop better for the steel tube industry than for the steel industry as a whole and that the forthcoming International Pipe & Tube Fair, Tube, will take place in a favourable economic environment. As before, the next leading trade fair of the tube industry will be held together with wire in Düsseldorf from 4 to 8 April 2016.