FA 08 There’s a lot in the pipeline

Pipe manufacturers and suppliers might be facing a real boom in the next few years. Apparently plans are in place to create about 20 million kilometres of pipelines, a development that is largely fuelled by a hunger for energy. The potential is therefore enormous. Yet a number of large-scale projects still have huge question marks hanging over them, and there is major competition on the market. Nevertheless, there’s a lot in the pipeline in this industry. 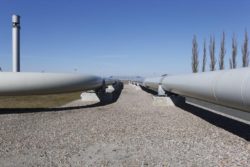 Europe plays an important role in the planning of pipelines. Its industrial countries are thirsting for gas, so that they can secure the energy supply of businesses and households. One megaproject, North Stream, has already been completed. The second and last strand of pipelines through the Baltic Sea, from Russia to Germany, was commissioned in 2012. The two strands, totalling over 1,124 km, have a joint capacity of around 55 billion cubic metres of gas per year. Each of them is composed of about 100,000 pipes.

Pipe manufacturers are jubilant about TAP and TANAP
And in fact we can expect to see further lights at the end of the tunnel – or at the end of the pipe – much to the delight of pipe manufacturers and suppliers. For instance, in 2020, when the Trans-Adriatic Pipeline (TAP) is due for completion. One of the jubilant winners to receive a major order for TAP is the Salzgitter steel group. The company supplies approximately 270 km of large-diameter pipes with a total tonnage of 170,000 – mainly with a 48” diameter – and around 1,660 pipe bends. The production and delivery of large-diameter pipes by Europipe, a joint venture of the Salzgitter Group and Dillinger Hüttenwerke, is already in progress. Production is set to finish in February 2017.

TAP will form a Southern European gas corridor through which gas will flow from Greece through Albania and the Adriatic to Southern Italy. It has an annual capacity of 10 to 20 billion cubic metres. The construction of TAP largely makes sense on account of another pipeline module, the Trans-Anatolian TANAP, which will take natural gas from the Shah Deniz II gas field in Azerbaijan right across Turkey to the EU border, where TAP will take over. TANAP will have a capacity of 16 billion cubic metres. The first gas supplies can start as soon as the Trans-Adriatic Pipeline (TAP) has been connected.

However, the construction of pipelines is not limited to Southern and Eastern Europe. The North Sea, too, is rich in energy sources. At the end of 2019 extraction is set to start at the Johan Sverdrup Oil Field in the Utsira High Region, 140 km off the Stavanger coast. The oil deposit is situated 120 metres below sea level and has a depth of 1,900 metres. The first facilities to be erected will be the processing platform, riser platform, drilling platform and living quarters platform. Day by day, a pipeline will then take some 550,000 barrels of oil to the Mongstad Terminal in Horaland, Norway. It has been estimated that between 1.8 and 2.9 billion barrels will be extracted and that production will not finish until 2050.

The contract to produce and supply longitudinal seam-welded corrosion-resistant pipes for the Johan Sveldrup Oil Field has gone to Butting. “The order volume has already reached nearly 1,000 tonnes of Duplex, Superduplex and 6 Moly,” says Christian Schenk from the CRA Pipes Department. Diameters range from 6” to 30”, with wall thicknesses between 3 and 14 mm.

Liquid gas is fuelling pipeline construction in the United States
Pipeline construction has become vigorous throughout the world. Last December, for instance, saw the beginning of the Trans-Afghanistan-Pakistan Pipeline, with a length of nearly 1,700 km. According to AHK (the German Industry Delegation for Central Asia), once the pipeline is operational, it will convey around 33 billion cubic metres of gas from Turkmenistan to Afghanistan, Pakistan and India. It is expected to become operable within the next three to four years. Experts see the Trans-Afghanistan-Pakistan Pipeline as providing vital coverage of the rapidly growing energy needs on the subcontinent.

In the United States pipeline construction is being fuelled by liquid gas. At the moment, for instance, a 440-kilometre line is being built straight across Texas, past Dallas and Houston right up to Mont Belvieu on the Gulf of Mexico. ThyssenKrupp Steel Europe is supplying 44,000 tonnes of hot-rolled sheets, grade X70, for the relevant pipes. “This is a micro-alloyed fine-grain steel with a yield strength of 485 megapascal,” says ThyssenKrupp Steel. 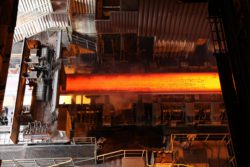 Pipeline steel for extreme requirements
Pipeline steel for the transportation of oil and gas must meet special requirements, some of them extreme. In fact, this is not just a matter of durability: “It is equally vital to withstand high operating pressure during transportation, high mechanical strain and indeed environmental conditions such as extreme temperatures.” The company emphasises that “this requires specific material properties in terms of strength and toughness.”

The hot-rolled sheets were supplied in Turkey where Borusan Mannesmann produces the pipes. This is also the first time that Borusan, the exclusive pipe suppliers for the Texas pipeline project, are producing 24.5-metre coiled pipes. Final on-site manufacturing will take place in the United States in 2016.

Whether it is North Stream, TAP or the Johan Sverdrup Oil Field, pipelines must be resistant to adverse conditions. This is ensured through suitable external coating, so that the steel pipes are protected from corrosion. “Any pipelines that are intended to run underground or in the water must have a protective coat applied directly to the metal surface,” says Deutsche Lackinstitut (the German Institute of Paint). A coat between 300 and 500 micrometres provides effective long-term protection against corrosion and against other environmental influences.

Coating ensures durability
One frequent option, according to the Institute, is an epoxy powder coat, whereby a polyethylene layer is wrapped around the pipe which is then cooled down, usually by means of a water curtain, so that it can be loaded and transported. “The polyethylene coat provides additional protection from mechanical impact, especially underwater and underground.”

Sometimes the outer coat is not enough. For instance, when the North Stream Pipeline was created (1,223 km), each pipe had a concrete shell added to it, with a thickness of 60 to 112 mm. “This means it can be securely lodged on the seabed at a depth between five and 250 metres, so that it cannot shift,” says the Institute.

Pipes also need to be coated inside. So-called flow efficiency coats (or simply: flow coats) reduce the amount of friction between the gas and the inner surface of the pipe. “Their purpose is to optimise the flow even further within the pipe.” Interior thicknesses vary depending on the medium that is transported. “In a gas pipe the coat is usually made of solvent-free epoxy resin and has a thickness of 50 to 100 micrometres,” says the Institute. Moreover, different wall thicknesses are required, depending on the pressure within the pipeline.

Demagnetised large-diameter pipes
The welding seams, too, are subject to inhospitable environments. One way to boost the quality of the seam and to prevent it from becoming a vulnerability is to demagnetise the pipes. “Magnetisation can occur on steel sheets during rolling, milling, forming and plasma-cutting, but it can also be caused during any submerged arc welding of coiled or longitudinal seam pipes,” says Dietmar Rieser, CEO of Schuler ATIS. When welding together the ends of pipes in a field, the arc is apparently deflected if the residual magnetism is too high, and the result is a negative impact on the quality of the seam. “This does not happen if the large-diameter pipe has been demagnetised.” Furthermore, says Schuler ATIS, the latest research indicates that demagnetised pipes have higher levels of corrosion.

The durability of a pipeline very much depends on the operational stability of the material and its joints. The flat steel manufacturers Salzgitter Flachstahl therefore emphasise that “zero defects” are a must for welding seams. Acid gas resistance is becoming increasingly important. “It happens more and more frequently,” says the company, “that oil and gas sources are connected and exploited which have a high level of hydrogen sulphide.” Moreover, such media are apparently highly corrosive, even though this cannot be discerned with the naked eye, as it occurs at the nuclear level. The properties and chemical compositions of steels for large-diameter pipes, says Salzgitter Flachstahl, have been described in a variety of standards, such as EN 10028, EN 10208 and API 5L. Standards are therefore of immense importance in the pipeline business.

Shattered pipe dreams
Even though a lot of things are happening in the pipeline sector, not every dream of a major project has come true in recent years. The Nabucco Project, for instance, was discontinued three years ago – a pipeline which was to take gas from Azerbaijan to Central Europe. Another axed project was the South Stream which was to take gas through the Black Sea to South-Eastern and Southern Europe. It was stopped at the end of 2014 when political developments had caught up with the South Stream. And of course, from Russia’s perspective, it will be a political decision whether the Turkish Stream will be built as a replacement of the South Stream. Also, a discussion is currently in progress whether a North Stream 2 should be built through the Baltic Sea – another controversial project in Europe.

The realisation of pipeline projects is increasingly decided not only by political developments (particularly in the last few years), but also by environmental aspects. Recently, for instance, the oil pipeline Keystone XL from the Canadian province of Alberta to the state of Texas (nearly 2000 km) was refused permission by US President Barack Obama. The reason he gave was climate protection. The oil is apparently extracted from tar sands, which are hazardous to the climate. At the same time, however, the United States no longer has as much of a need for Canadian oil, as the intensive use of fracking has given the US a sizeable additional source recently.

Pipe manufacturers won’t miss out
Plans for oil exploration in the Chukchi Sea off the coast of Alaska have also been axed. After its test drillings Shell came to the conclusion that the potential yield would be lower than hoped and that it would be too expensive. The oil group therefore cancelled the project, whereupon environmentalists were extremely pleased, as they had warned against its impact on nature. Moreover, there is a rumour among experts that the loud protests may well have influenced the decision.

Although quite a few pipe dreams have been shattered, plans are still in progress to set up further pipelines, for instance for the major markets in the Asian region, and numerous ideas are currently on the shelves of planning offices. This means that efficient pipe manufacturers won’t miss out on developments any more than they have done.

Innovations from the pipe industry will be presented at Tube Düsseldorf from 16 to 20 April 2018.