Yet this generally positive result for the German steel tube industry must be seen in perspective, considering that Germany once produced nearly 4 million tonnes of steel tubes before the 2008/2009 financial crisis. The 2009 slump – with figures far below 3 million tonnes – was followed by a period of recovery from 2010 to 2012, when considerably more steel tubes were produced again. A further slump occurred in 2013, whereupon German production levelled out at around 2.5 million tonnes (see illustration: German Steel Tube Market 2007-2016). The strong fluctuations in production figures were due to general economic developments and, in particular, domination of the oil and gas sectors on the customer’s side.

Price developments in oil and gas have been indicative over the last few years. When an oversupply on world markets led to a collapse in crude oil prices in 2014/2015, the energy industry largely suspended its investment activities. Stock market prices also continued to go down for gas. This development particularly hit the supplier industry, where some sales figures dropped to less than half their values. North America’s fracking industry, which had been booming until then, was impacted particularly strongly by this development.

German production for export
It also affected German tube manufacturers who, traditionally, have always recorded extremely high exports. In Germany for example, nearly 99 per cent of the country’s production volume (i.e. no less than 2.37 million out of 2.4 million tonnes) was exported to other countries (source: 2015 Annual Report of the German Steel Tube Association). The trade surplus in this sector, however, was mitigated by over 2 million tonnes of imported steel tubes. To put it in simple terms, Germany’s demand for steel tubes is largely covered by imports, while domestic manufacturers produce almost entirely for export.

The biggest German tube manufacturers include Salzgitter, Benteler, Vallourec and Maxhütte. Salzgitter AG’s Mannesmann Division, which handles the group’s steel tube activities, shipped 543,000 tonnes in 2016 (compared with 526,000 tonnes a year earlier). Despite improved results at Salzgitter Mannesmann Grossrohr GmbH and an increase in the positive earnings of the Europipe Group, which are included in group’s consolidated accounts on a pro-rata basis, external sales in the tube segment as a whole experienced a slump, due to structural reasons and reduced earnings (source: Annual Report 2016).

The Mannesmann Division of Salzgitter AG largely focuses on international projects in the infrastructure and energy supply sectors, covering a broad spectrum of diameters for line pipes. Its portfolio is complemented by a company that describes itself as Europe’s dominating supplier of precision steel tubes for automotive engineering and another company that is a leading global manufacturer of seamless stainless steel and nickel-based tubes.

As the group sees it, last year marked “a series of significant phases, if not turning points.” The Executive Board of Salzgitter AG believes that this included the EU Commission’s implementation of “effective trade protection instruments” against the “flood of dumped imports.” These measures were urgently required as the medium to long-term survival of Europe’s steel industry was meanwhile at stake with 330,000 jobs. The introduction of anti-dumping measures from February 2016 onwards was apparently a major factor in bringing about a provisional end to the extreme price erosion that had prevailed in Europe for several years.

Nevertheless, the company continues to see major challenges for the future, especially in the tube sector. It believes that large parts of the line pipe market and of the heavy plate sector are still in a precarious state. It is apparently impossible to predict the extent to which political upheaval in Europe and America might impact the basically favourable economic outlook. Consequently, it would therefore be “sheer negligence to solely rely on improved framework conditions in these uncertain times”.

The number of orders received by the Mannesmann Division in 2016 remained below the previous year. On the one hand, this was due to lower volumes of orders for stainless steel tubes received from European stockholding distributors and very low number of oil and gas projects. On the other hand, as expected, it was impossible to reach the extraordinarily high value of the previous year, even in large-diameter pipelines. A further negative factor impacting the level of orders was the development of the stainless steel tube segment. Outside the group of consolidated companies there was a substantial increase in the number of orders received by the Europipe CAT Group, mainly thanks to three projects: Nord Stream 2, TAP On-/Offshore and Zohr, so that the number of orders was higher than in 2015.

In all, following a slight surplus in the previous year, the Mannesmann Division made a pre-tax loss. The result did, however, include spendings on structural activities particularly at Salzgitter Mannesmann Line Pipe GmbH (MLP) which is seeking to counter the weak international oil and gas business and intensive price competition with a restructuring programme involving capacity adjustments and further cost reductions.

Outlook for 2017: slightly better prospects
The Salzgitter Group is expecting the companies in the Mannesmann Division to develop homogeneously again in the 2017 financial year. Whereas the group’s German large-diameter pipeline manufacturers are experiencing some good capacity utilisation, due to last year’s orders, the order situation has gone down somewhat on the North American market. Some recovery, albeit perhaps hesitant, can be expected in medium-sized line pipes and in precision and stainless steel tubes. in all, rising shipment volumes, supported by a higher selling price, should result in moderate sales growth in this segment. However, this is based on the assumption that there will be no recessionary development in Europe. The group is expecting to see continued economic success on its main markets which continue to be highly competitive.

In all, Salzgitter believes that its prospects for the steel tube industry are slightly better compared with its very restrained estimate a year earlier. Following some initial upward stimuli caused by rises in raw material and steel prices, the steel tube business, too, should be receiving a boost. Positive effects are also expected from North America’s expansion-focused economic policy and greater orientation towards fossil energy. The seamless tube business, in particular, should continue its recovery, even though this segment still displays substantial overcapacities on a global scale. As before, the large-diameter pipeline market is dominated by project business and is highly competitive. The latter is particularly true for the line pipe business with diameters up to 16 inches. The precision tube industry should develop robustly as the general economy is currently in good health.

2016 has received a similar assessment from the Benteler Group with its three divisions: Automotive, Steel/Tube and Distribution, controlled by Benteler International AG in Salzburg, Austria. Benteler sees 2016 as a year of intense competition, volatile markets and political challenges. Whereas its Automotive Division improved its sales and profits over the previous year, these figures went down for the Steel/Tube Division. This was caused by reduced demand in a market environment characterised by overcapacities and therefore put considerable pressure on price levels in the United States and Europe (source: Annual Report: 2016).

An important factor in Germany was a five-year agreement concluded with the trade unions in late 2016 with the aim of securing German production locations. It says: “The concept to secure the German locations forms the basis for a sustainable future for the Division and its ability to be successful in a rapidly changing market.” Benteler is cautiously optimistic about the company’s future economic development, believing, for example, that the Steel/Tube Division is facing a better situation in the market. At the same time, however, the earnings of the division have declined due to start-up expenses at its new hot rolling mill in Shreveport (US). Thanks to general improvements in operational performance, the additional start-up expenses will lead to lower earnings of the group than in the previous year. Cautious optimism also characterises the group’s view of its economic environment which is showing some first positive signals in the steel tube market.

Steel tube market in a challenging environment
Benteler, too, emphasises that the steel tube market was shaped by the development of oil prices in 2016. At the beginning of the year the benchmark rate WTI recorded its lowest point, but then recovered again during the year. The OCTG (Oil Country Tubular Goods) regions of North America and the Middle East, in particular, stabilised at the end of the year and are showing signs of recovery on the market. Many Asian countries are continuing to show positive, yet low-level growth, whereas China recorded a further drop in demand, due to a reduction in oil prices. The steel tube market in the EU is marked by overcapacities and price pressure. European manufacturers responded to a further decline in production of seamless steel tubes in the EU with cost reduction programmes and portfolio optimisation.

Positive signals, according to Benteler, are that tube inventories of oil and gas applications in the US market decreased further towards the end of 2016. The US rig count also rose to over 650 during the year, representing a rise of 48 per cent compared with the first quarter of 2016. Furthermore, OPEC’s consensus on oil production volumes had an invigorating effect on oil prices and on the resulting recovery of the steel tube market.

Manufacturers and the association agree that prospects in the steel tube industry have improved since the previous year. After investments within the energy industry virtually came to a standstill in response to the slump in crude oil prices, the German Steel Tube Association now believes that such investments are beginning to bounce back to normality. The resulting pent-up demand should benefit the steel tube industry, in particular. Further positive effects on the steel tube business can be expected from cyclical rises in raw material and steel prices and from a steadily robust economic situation in the industrial countries – a situation which continues to be driven by relatively good energy prices, an expansive fiscal policy and a favourable euro/dollar rate.

Although it is currently impossible to predict the development of the steel pipe industry in 2018, one thing is certain: steel tubes of all types and sizes and also plants and machinery for the production and processing of tubes will be a central topic at Tube 2018. The industry will be meeting for a new edition of its leading International Pipe & Tube Fair at the Düsseldorf Exhibition Centre from 16 to 20 April 2018. As before, it will again be held together with wire – the world’s biggest cable and wire fair. 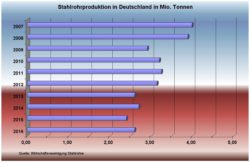