Technical Article 13 - Humans and robots – side by side 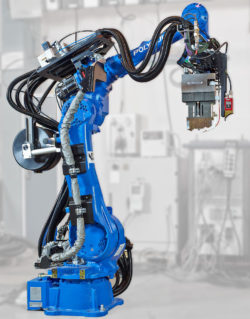 Poor concentration and fatigue – never! Robots have always been seen by their human counterparts as reliable and indispensable “colleagues”. They are now increasingly handling the welding, bending, cutting, separation, transfer and storage of pipes and tubes. Thanks to artificial intelligence and machine learning, robots are set to become even more flexible and will eventually replace purely repetitive robots altogether.

You turn up at work in the morning, and the first thing you do is switch on the telly. It doesn’t seem very appropriate at first sight. But this is precisely what is being turned into reality with the camera-controlled and fully electric manufacturing cell from Transfluid Maschinenbau – the element which is right at the heart of a smart tube forming system. What you can see “flickering” on a large screen is not the latest news bulletin, but valuable details about the energy consumption, CPK value and quantity of the tubes formed up to now.

Robots as an important module
Robots are an important module at the Transfluid tube forming centre and are used in the production of air conditioning lines. As well as a camera monitoring system, the plant has a magazine, a 4-axle handling system, two combination machines for tube forming purposes, a bending machine, a chamfering unit, a dot-matrix printer and two robots.

Before bending can start, one side of a tube is always handled in combination with a tube forming machine, while the other side is chiplessly cut after the bending process and is then also formed. Should this be required, the robot subsequently holds the tube into a deburring device. “Both ends can be visually monitored via a camera,” says Stefanie Flaeper, Managing Director of Transfluid. “Alternatively, the robot holds the tube into a labelling unit where it can then be marked at all the required points – and in fact completely without any clamping device.”

100 per cent quality
Using a forming system with a rotary table, it would then be possible to join two tubes together with a flange. For the manufacturing process this means maximum safety, a high yield and 100 per cent documented quality – while informative “entertainment” is provided on a large screen as a nice side-effect.

Robots have definitely proved their worth in pipe and tube forming. Flaeper emphasises that they “ensure controlled handling” because a robot is, after all, ideally suited for the manufacturing of bent components. “On the other hand, they tend to be of lesser significance in the handling of long, straight tubes and pipes. Linear systems are faster for this purpose.” Robots are particularly widespread in machining, “because this involves either complex handling or manipulating heavy parts.”

Use in welding
For Polysoude and its customers robots are a good supplement to conventional automation solutions. A robot makes it possible to guide the torch along the pipes themselves in manual tungsten inert gas (TIG) welding, even where there isn’t much space. It also ensures “a high-quality seam thanks to the precision and reproducibility of movements in complex geometries,” says Hans-Peter Mariner, Managing Director of Polysoude.

Robots are generally very widespread in welding, but not particularly in TIG welding. TIG is used “almost never in conjunction with narrow gap welding or the welding of pipe-floor joints.” This is due to legal requirements which include, for instance, a shielded zone without user access – unlike conventional automation solutions. Polysoude, however, allows the use of robots in TIG welding.

Robots and nuclear fusion
The essential criterion for choosing a specific type of robot is the level of precision which, says Mariner, “is a matter of the TIG welding itself, even under full load, within a range of 5/10 mm.” Furthermore, “it’s important for a robot to be easy to program and to have sensors, especially for smart tracking purposes.”

TIG welding with the use of robots has achieved a certain amount of fame in one of the most ambitious projects in the world, called ITER (International Thermonuclear Experimental Reactor). The project is to prove that nuclear fusion as an energy source can be used for electric power production without major carbon emissions. 35 countries are participating in the design of the planned Tokamaks nuclear fusion chamber.

Welding together extremely thick walls
Polysoude supplied a robotic welding system to the Italian company Simic where they were used for the construction of radial plates for ITER. The plates were made from stainless steel, each with a wall thickness of 100 mm. Welding together these parts turned out to be an extraordinary challenge. The work is currently performed on site, in southern  France, with major requirements in terms of bonding precision and zero error quality.

TIG hot wire narrow gap welding turned out to be the best choice for welding together such extremely thick parts. The tool carriers for narrow gap burners, such as robots and welding trolleys, have been adjusted to suit the target object in both size and geometry. TIG narrow gap welding, incidentally, can also be applied for pieces up to 400 mm in wall thickness.

Reaching for the stars
Naturally, reliability and quality are greatly prioritised on the ITER project which has been in progress at the Cadarache Nuclear Research Centre in France since 2007. The Tokamaks chamber, which is surrounded by super-conductive magnets, is to serve as the place where the hydrogen isotopes deuterium and tritium are to be heated up to a temperature of 100m°C, causing them to fuse. It’s a technology that reaches for the stars – quite literally, by seeking to imitate them. After all, it is nuclear fusion that enables the sun and the stars give off energy.

However, ITER has also drawn criticism, due to its immense expenses – estimated at over €15 billion – for one of the biggest building sites in Europe, coupled with a delay in completion. Advocates of the projects, on the other hand, see nuclear fusion above all as a highly efficient form of energy production, apparently generating 10 times as much in output. Moreover, it is considered to be an energy source without carbon emissions and virtually no radioactive waste. The first hydrogen plasma is expected to be produced around 2025. Robots, too, are helping towards the success of the ITER project.

Robots in machine processing
Sometimes it’s the combination that matters. Twister, a bending system developed by Wafios, can even be used in pipe/hose combinations. To boost productivity, Wafios has linked the system to a KUKA robot, and operation is amazingly simple. KUKA, a company that makes robots, has seen steady growth in the market for robotic handling for several years now.

Until recently the focus has been mainly on handling processes where the demand on accuracy is relatively modest. Either the process chain included a processing tool with a specific element which compensated for inaccuracies – a polishing disc, grinding head or flexibly deflecting deburring spindle – or the issue of accuracy was more or less irrelevant. “Such handling processes are still often carried out by humans. However, due to increasing cost pressure, yet unchanging quality requirements or lack of human resources, they will be handled more and more by machines or automatically,” says Alexander Bailey, Market Segment Manager CNC/Machining at KUKA Roboter.

China as a future market
It’s a development which KUKA is prepared for. The general industry is growing very strongly, mainly outside Germany. “All you need to do is look at the electronics market which offers enormous potential for growth in automation,” says Bay. Apparently, this is particularly true for Asia, and the focus on the general industry goes hand in hand with increasing internationalism. Germany continues to be seen by KUKA as an important market for a robotic automation solutions. “However, we also believe that the big growth markets of the future are outside Germany and Europe. This is why we are focusing above all on Asia and, within Asia, on China, the country which – according to the International Federation of Robotics (IFR) – has the biggest and fastest growing market for industrial robots.”

There are good reasons why the Middle Kingdom is considered to be the future market for robotics. It is already by far the biggest sales market in industrial robotics and is marked by extremely high growth rates. In three years’ time the International Federation of Robotics is expecting China’s annual sales of industrial robotics to rise to 160,000 items, which would then be nearly 40 per cent of all global sales.

Milling gigantic pipes
Another domain that is important for KUKA is the increasingly attractive market of plastic pipes. And so the company makes not only the KUKA 120 R2700 Extra HA robot, but also the KL 1500-3 T linear unit, two KUKA MG 360 servo motors for the external rotational axis and the KUKA CNC controller. These systems form part of a completely integrated automation solution, developed by Eugen Riexinger for the production of pipes for the Weholite licence-holder Asset International Ltd. in Newport, South Wales. The automation solution allows the precise milling of gigantic pipes with diameters up to 3.5 metres.

These oversized pipes are used, among other things, in gravity drainage, in mechanical drainage, in underground channels, in retention basins and in low-pressure applications. As the system is barrier-free, a robot can move directly to the relevant plastic pipe on the linear unit and can then flexibly work on the component, as required. Graham Bennett, Operations Manager at Asset International, is pleased with this solution: It’s helped us achieve a significant increase in productivity.” For shorter manufacturing times, the company has apparently even increased its capacity by over 50 per cent.

Robots – colleagues of the future
There can be no question that the use of robots already has enormous potential: Whenever the product quality is impacted by the workforce, robots have major potential. One important driver in the application of robots is considered to be the automotive industry.

And the end of this potential is still a long way off. Until now robots have mainly performed repetitive tasks, working at the same level of consistent precision and repeatability. “The requirements of the future will be different – especially in professional service robotics,” says Alexander Bay, Market Segment Manager CNC/Machining at KUKA Roboter. “If robots are to move into other areas, they’ll need to become more flexible, and this is where machine learning might help.”

Part of Industry 4.0
Robots are increasingly also entering Industry 4.0. Serving as flexible production elements, robots will be able to collect data in production and then exchange them with IT systems. “As a result,” says Bay, “production routines will become even more efficient, and systems will be able to respond quickly to specific customer requests.”

Another trend is the simplification of programming. “This will include online connectivity for robots, enabling them, for instance, to import data from external systems, such as CAD,” says Stefanie Flaeper, Managing Director of Transfluid. It’s apparently quite a challenge to use robots for very small production sizes – something which is still only possible to a limited extent.

Industrial and private environments
KUKA sees great future potential in the 3C, logistics and service/consumer robotics. Also, says Bay, robotics is increasingly moving from the highly organised sphere of industrial production into the more “chaotic” private environment. This is because artificial intelligence can help to prepare robotic systems for imponderables and changes.

Nevertheless, one thing is certain: “Robots will move closer to people, taking over even more tasks from humans and supporting them in carrying out certain difficult jobs,” says Transfluid’s Managing Director Stefanie Flaeper. “It would also be interesting if a robot could imitate the movements of a human being in a production process with a high level of accuracy, but without the need to be programmed.” Humans and robots side by side, as it were. Generation R will take over ... 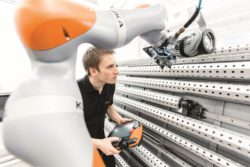