Robots and people are joining forces 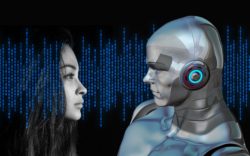 You can rely on robots – and not only for precision welding, bending and cutting of pipes or for transporting and depositing pipes. They generate steadily increasing sales figures for their manufacturers and users just as reliably. And that, even though their huge, boundary-shifting time has only just begun. Because soon enough, robots will use artificial intelligence to catapult industrial production into spheres that were previously unimaginable.

Robots are definitely a model for success. Maybe not on the catwalk yet, where they probably will not look good in the future too – rather awkward-looking – but in production. Impressive figures from the International Federation of Robotics (IFR) demonstrate just how much their use in industry, and so also for pipe production, has changed purely in terms of quantity. In 2008, the number of industrial robotics units worldwide was still 113,000. In 2018 this number climbed to 384,000 units. Where it will end is completely open!

“The North American countries – US, Canada and Mexico – represent the second largest operating base of industrial robots in the world after China,” said IFR president Junji Tsuda, president of the International Federation of Robotics. While many major robot system integrators came from North America, most major robot manufacturers are located in Japan, Korea and Europe.

Closed process chains
Love that lasts: robots remain in demand – even in the face of global economic and political uncertainties. Germany as example: according to the German Mechanical Engineering Industry Association (VDMA), German robotics and automation achieved a sales volume of 15 billion euros for the first-time in 2018 – an increase of 4 %.

“Geographically, the strongest development of course take place in the markets which today still completely or partially dispense with automation,” explains Stefanie Flaeper, Managing Director at transfluid. Wherever employees can exert qualitative influence on products, the potential is also very high. “If closed process chains are desired, there is certainly great potential for growth here. This is also of interest when dealing with sensitive components.”

Automotive as the engine
The driving force behind the ever-increasing demand for robots is the automotive sector, where robot use is gaining momentum. This is followed by areas such as electrics/electronics, metal, plastics and chemical products as well as the food and beverage industry. In other words, a development that electrifies numerous industries.

The size of the company plays a key role in the use of robots. In 2018, almost every sixth company in the manufacturing sector (16 %) in Germany with at least ten employees used industrial or service robots. As the German Federal Statistical Office explains, large industrial companies use robots more frequently than smaller companies. In large companies with at least 250 employees, the proportion is 53 %. In medium-sized companies with 50 to 249 employees, it is 24 %. With a share of 10 %, small companies with 10 to 49 employees use robot technology much less frequently. “Industrial robots are used, for example, for welding, laser cutting and special-purpose painting,” reports the Federal Statistical Office. Service robots would be used for monitoring, transportation and cleaning purposes.

Shoulder to shoulder
The robot works like clockwork and provides impetus to the company's sales. A pat on the back would be appropriate – if it would have meant something to a robot. Simply as a thank you for doing its job in production repetitively with the same precision.

The advantages of the robot in industry are obvious: These include “increased productivity, production reliability, stable processes, ‘closed’ production processes – with a finished part – and linking also in difficult positioning,” explains transfluid CEO Stefanie Flaeper.

However, robots are usually “lone warriors”. They are often separated from humans by a safety fence. But this is likely to change with the use of artificial intelligence in the future, when robot and man work shoulder to shoulder. What would have been considered science fiction years ago, is slowly but surely becoming reality.

Imitating man
The robots will join forces with humans, take on even more tasks, assist their human colleagues to accomplish specific difficult tasks. “The challenge is to be able to use the robots even for very small production volumes, which is only partially possible today,” says Flaeper. If successful, it will open up a new field of activity for robotics. “It would also be interesting if the robot could very precisely mimic the movement of a person in a production process without having to be programmed.”

The potential of an intelligent – and “sensitive” – robot is immeasurable. “Because specified processes which can be simulated digitally and undergo corresponding evaluations are important in Industry 4.0, a robot is superior to humans,” continues Flaeper. Because the robot provides the security that the processes are always the same and could be simulated accordingly. The processes could be represented and checked via a digital twin.

Digital approach
Therefore, the limits of the possible that appeared hardly surmountable until a few years ago are shifted tirelessly not only in companies, but also in institutes and universities. The Institute for Robotics and Mechatronics, for example, is working on this. One focus of the institute is on the pilot project “Factory of the Future”. It involves the implementation of robust robot-aided manufacturing processes with the help of digitisation approaches in the context of Industry 4.0. “This includes, for example, Cobots (collaborative robots), which are as easy to use as smartphones, as well as robots that generate the necessary programs for assembly in any quantity,” explains the institute. These flexible and interconnected manufacturing processes would make applications more efficient, less expensive and safer.

As part of the EU-wide SOMA project, employees of the Institute of Robotics and Mechatronics have made significant progress in the sensitive gripping ability of robots. SOMA started with the objective of improving the state-of-the-art robot manipulation capabilities for the industry. The project has already been completed “and includes a number of scientific breakthroughs in the ability to grip and manipulate undefined objects such as fruit or vegetables with robotic hands,” explains the institute.

“Soft hands”
The traditional approach to robotic grasping and in-hand manipulation uses rigid hands and regards the environment of the object as an obstacle. Development focused on exploring ways to grasp an object without coming into contact with its surroundings.

“The SOMA project, on the other hand, uses soft hands that can easily adapt to the shape of the object and use the physical constraints of the environment as an opportunity to guide manipulation,” emphasises the Institute of Robotics and Mechatronics. This fundamental change in approach was inspired by the way people use their hands.

The SOMA consortium consists of world-renowned researchers, academics and scientists. Apart from the German Aerospace Center (DLR), employees from the Technical University of Berlin, Ocado, the University of Pisa, the IIT – Istituto Italiano di Tecnologia, and the Institute of Science and Technology Austria are cooperating.

Festo developed the “BionicSoftHand”. The human hand is a natural model for the gripper. According to the company, it will be pneumatically operated to enable the BionicSoftHand to interact safely and directly with humans. Artificial intelligence will allow “the bionic robot hand to autonomously learn to solve gripping and turning tasks, similar to the human hand in interaction with the brain”.

Efficient and productive
Robots are already proving successful in day-to-day industrial life. For example, the TWISTER® from Wafios “meets the highest standards of quality with extremely fast processing, making the manufacturing processes efficient and productive,” the company emphasises. The Twister® robot bending system is not a traditional bending machine, but “a compact all-rounder that meets the manifold requirements of bending tasks as well as the handling of the most complicated bending parts”.

The TWISTER® provides a bending system that can even be used with pipe-hose combinations. “This base, combined with a KUKA robot, forms an unbeatable team,” says Wafios. This technique allows the system to achieve a significant increase in productivity.

MiiC OPTON (Europe) is also continuously developing its robots. For example, a MiiC OPTON (Europe) 6-axis robot with bending head is guided on a bed. The robot traverses the guideway to bend a work piece, which is held by the chuck in a fixed location. “In its driving mode, the robot performs loading, unloading, all movements of the feed between two bending points as well as rotation and bending,” explains the company.

Energy and data
There are many things to consider in the field of robotics, for example, energy and data management. Leoni developed intelligent solutions for robot energy supply and drag chains. "These make it possible to avoid the unplanned shutdowns of a plant and so reduce maintenance costs," explains Leoni. This makes production more efficient.

Energy supply systems and drag chains supply energy to robots and production facilities and ensure the connection to the controller and sensors. “They are exposed to very high levels of daily production and can lead to costly unplanned production downtime when data and power cables on robots and drag chains fail due to wear.” Leoni therefore developed intelligent cable systems that actively monitor, analyse and transmit their condition. “The clear aim is to avoid downtimes in production and increase plant availability in production.”

Lucrative orders
Investments in robotics have long been worthwhile. For example, Leoni was commissioned by Volkswagen to equip 1,300 robots for the manufacture of electric vehicles from the MEB (Modular Electrification Modular System) platform at its Zwickau site with the LSH3 hose package solution. This way Leoni assists VW in the conversion of the production site for combustion vehicles to a pure e-mobility site, which should be completed by the end of 2020.

At the VW production site in Zwickau, Leoni equips the robots with the LSH3 hose package solution for joining techniques such as welding, handling, lasering, clinching or gluing. In addition, the project includes the installation of floor wire sets, in other words, the wiring from the robot or the stationary tool to the robot controller.

The development around robotics is speeding forward in the fast lane. Companies who want to stay on the inside track to success should therefore take a very close look at them. Because lucrative orders beckon.

News and trends on robotics will be presented at wire and Tube Düsseldorf from 30 March to 3 April 2020 at Düsseldorf Fairgrounds.